Tertia has been in High School now for a month, and last night I finally had a chance to meet her teachers.  Some of them, anyway.  Everytime when Steve or I introduce ourselves, we get "Oh, I LOVE Tertia!"  This is a great thing to hear, and I think it is genuine.  It makes it easier, putting her on a bus at 6:50 and sending her to the great unknown down the street.  Here's what we do know: she's supposed to be in an "intensive academic" special ed classroom, but it's really more "life skills" in emphasis, which would make me uncomfortable if that was the only place she went.  But I like her teacher a lot.  And she is the only girl in her class, which is a little weird, but apparently she's taking that and running with it.  I hear about her empathy, her love of drama, her ability to navigate her way around the school. 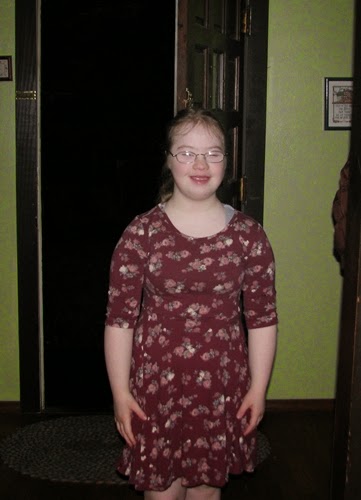 She dressed up for her birthday.  It is really early when she has to get on her bus.  Some of the paras gave her presents and a chocolate cupcake... she was a little embarrassed to let me see the Disney princess presents, because she knows she's supposed to have outgrown them.  But I don't mind.  She is in a "learning support" reading/literacy class -- the teacher whispered in my ear "she probably works harder than any of the others!"  And she is in the concert choir, which is her favorite class: 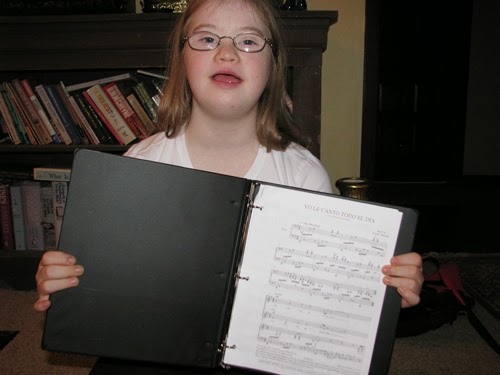 I worry about her ability to blend in with the group and follow the music.  She is excited about her music and wants to do her best.  She also has an art class with the general population.  I have been so pleased with how she is getting herself up and even packing her own lunch some days.  Maybe we can keep this schedule up.  It has been a hard month, with catching up from travelling, and teaching being exhausting and demanding.  I even missed the Down syndrome Buddy Walk, something we've participated in for the last 3 years and loved.  Sometimes it felt like Tertia is having to take a back seat to other demands in my life, and I hate that... even though she doesn't ever complain. 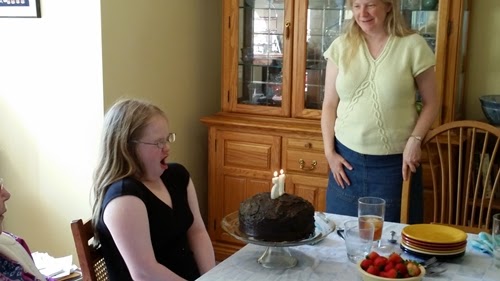 Birthday number 15 was celebrated with spaghetti and a chocolate cake, garnished with strawberries.  A deep breath before blowing out the candles. 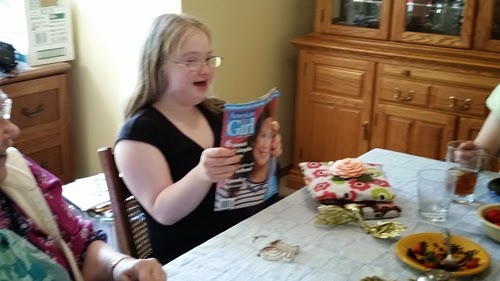 Somehow 15 years ago I never foresaw High School.  I don't know why.  The beginning of the Down syndrome adventure was all about babies and medical tests and therapies, combined with a lot of worry about the future.  But somehow, I never knew the future would be so endearing.  She's going to be okay.  She's rocking High School.

October is Down Syndrome Awareness Month.  We'll try to make it a good one for her.
Posted by Kathy at 9:11 PM

Email ThisBlogThis!Share to TwitterShare to FacebookShare to Pinterest
Labels: advocacy, down syndrome, family