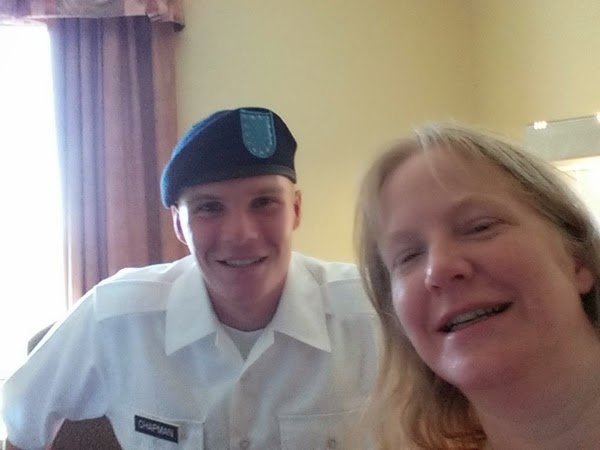 I love this picture -- the mother-soldier selfie!  It represents one of the few moments of pure joy in recent months; for Peter, a rare off-base leave after ten weeks of deprivation and harshness; for me, an interlude of one-on-one family time that seems to become rarer all the time.

As you know if you've been following my "What I did on my summer vacation" posts, the rest of our family had a lengthy road trip vacation, combined with seeing Daniel off to college in Pennsylvania.  Peter was at Fort Sill, OK doing basic training for most of the summer.  His first full day was the 4th of July (and he didn't get to take a holiday) after more than a week of whatever "processing" involves, which I really don't want to know about.  I was able to fly down to Oklahoma to see the Family Day and Graduation for Peter and his class of soldiers in training -- four platoons of fine young people who worked very hard to learn how to defend our country.  I was impressed.  And this brought the number of states I set foot on this summer to a grand total of 18.  If you count flyovers it would make more than half the states. 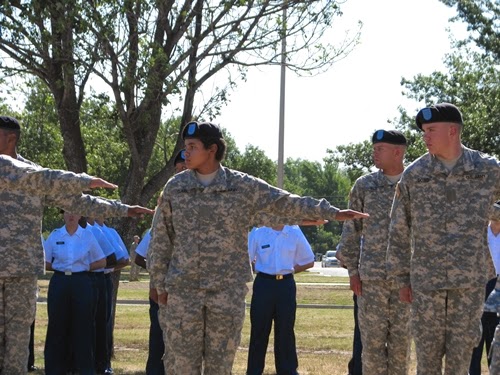 At the Family Day ceremony they did a series of demonstrations of the skills that were drummed into them over the summer. I think they cleaned up the language a bit for us.  I noticed after I parked the rental car and started walking towards the stands that every few minutes there would be some distant thunder.  But the sky was blue and it was a hot day.  It finally dawned on me that... this is an artillery base.  That thunder wasn't thunder. 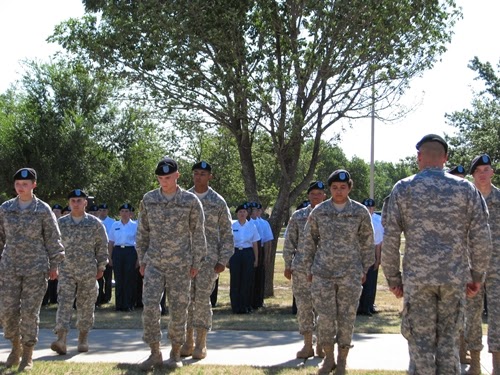 Peter received his first promotion at that time... Private E-2, I believe.  After that ceremony I signed him out and took him to the hotel room where we took that selfie... then we hit the mall.  Lawton, OK is pretty much a company town for the Army.  Everywhere we went Peter was being congratulated and I was amazed at how appreciative everyone was.  The White Buffalo gave him a complementary lunch, for example.  We shopped for dress clothes for school... Peter will be having a more or less regular Senior year at Cedar Tree with one weekend a month where he has to report for National Guard training.  And Seniors at Cedar Tree get to wear "business casual" rather than school uniforms.  We saw "Guardians of the Galaxy," which was a great movie at baseline and Peter liked even more because it was the first entertainment of any kind he had had in so long.  And of course, the hero's named Peter. 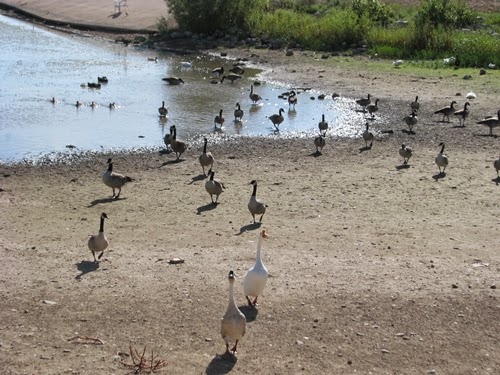 The next day I had to wait until 1:00 for the graduation ceremony, and since I'd already seen the mall, I decided to check out the amenities of the park near the auditorium where graduation would be.  There is a small lake, with lots of extremely un-shy geese.  It was very hot, and I decided this was not the kind of park where I could sit and knit in the shade.  There wasn't really any shade. 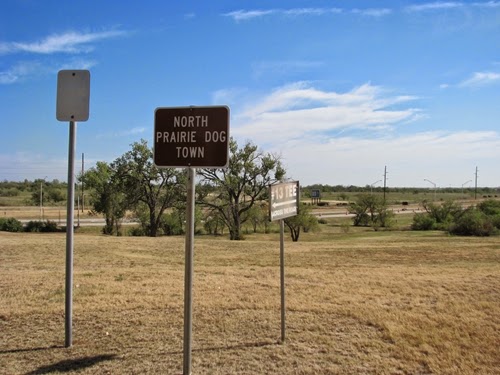 The prairie dogs weren't out, and no one was playing disc golf. 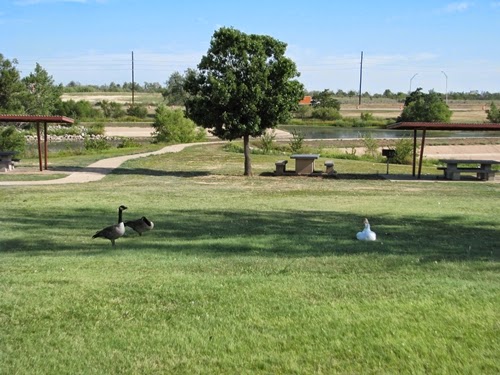 I couldn't shake the feeling that the geese were organizing. 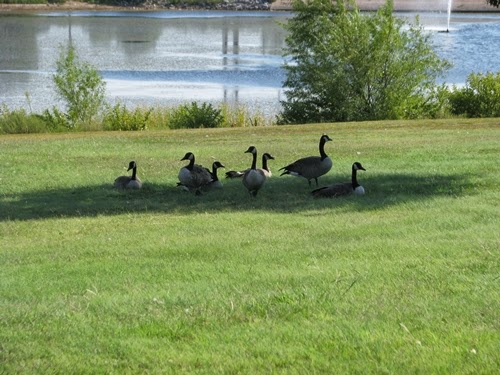 It was a little bit like a Hitchcock movie.  But not very much, because they never attacked. 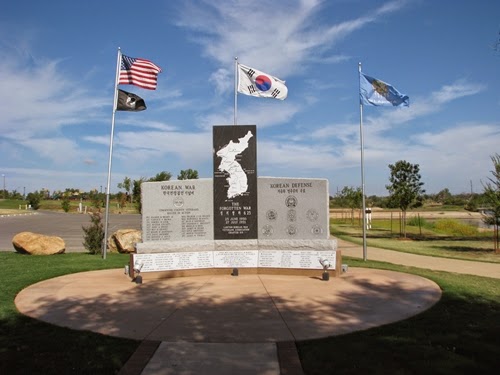 There were memorials for the Korean and Vietnam wars. 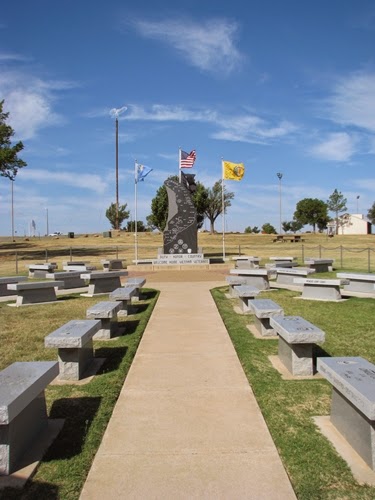 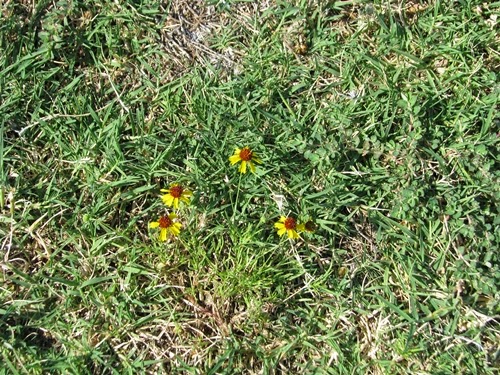 Some pretty prairie flowers.  I kept trying to get a picture of the dragonflies, but they moved too fast. 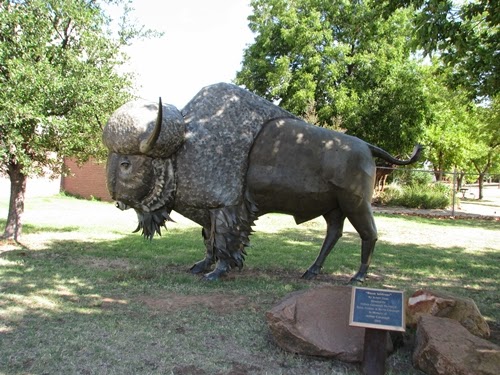 I decided to go to the Museum of the Plains, guarded by this statue of a Bison Latifrons. 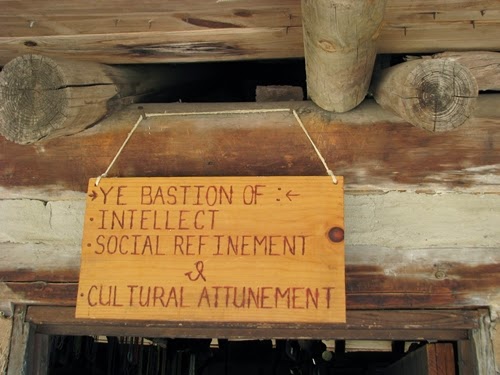 I need one of these signs for my house. 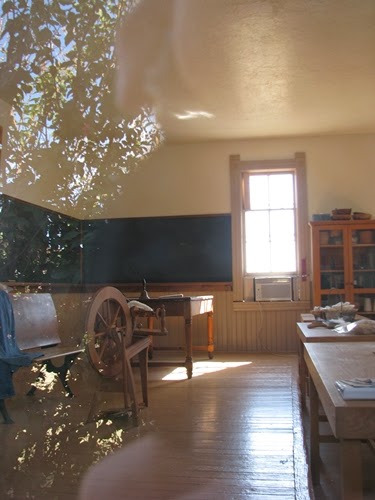 The old schoolhouse was locked up, but I think they use it for occasional fiber demonstrations, 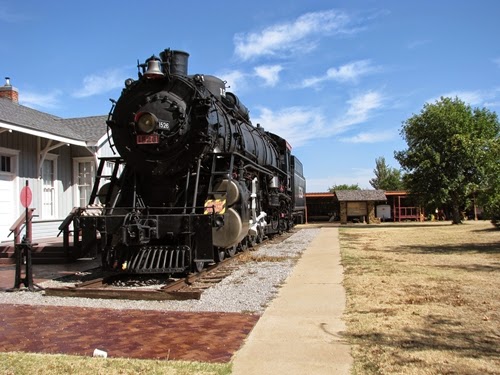 I kind of want to read the Little House books again, after seeing so many of the sites on vacation and then spending time in Oklahoma. 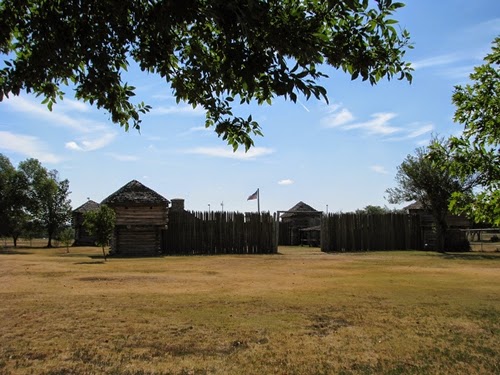 It's really hot there, even in the morning. 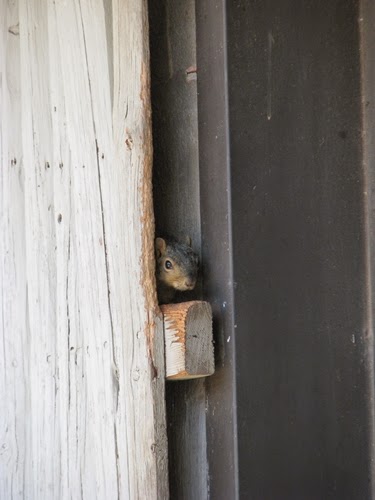 There was this little squirrel hiding inside the wall of the main building.  I used to think squirrels were cute until one chewed a hole in our roof.  I still think they are interesting little animals, if a bit more destructive than I had previously realized. 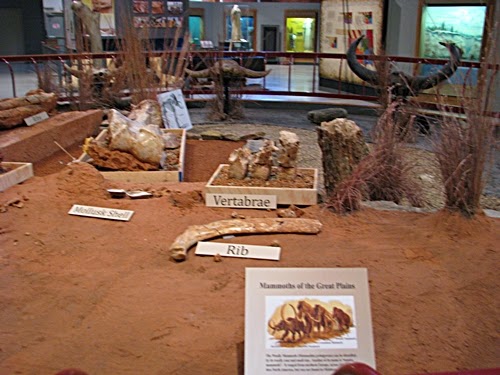 I really wanted to edit the spelling of vertebrae.  The Museum of the Great Plains had a lot of exhibits about the early pioneers and about the conflicts during the time Oklahoma was Indian territory.  I then went to the Comanche Museum and Cultural Center.  There were Comanche code talkers during both World Wars -- everyone hears about the Navajo code talkers, but I didn't know about the Comanche.  They have a great story in their own right. 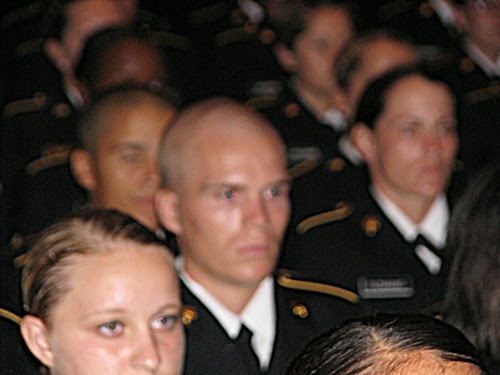 As we filed into the auditorium the young soldiers were sitting at attention and presumably forbidden to make eye contact. 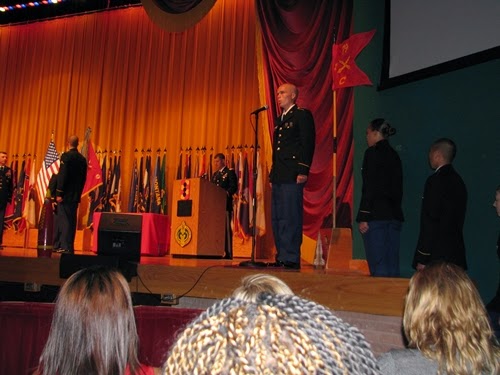 Each graduate stated his or her name and hometown before walking across the stage to shake hands with the officers.  After the ceremony they were bussed back to the base, where we had to drive to pick them up for leave time. 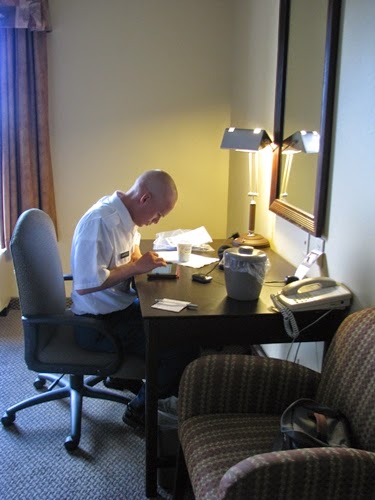 Having exhausted most of the action in Lawton, Peter was happy just to hang out in a comfortable hotel room, listening to his favorite music on Spotify, drinking coffee and surfing Facebook.  We had dinner at the Olive Garden and got him back to base before curfew.  In fact, he made it back to PDX before I did the next day.  Then on the following Monday, it was back to school for him and for me... perhaps the real war zone.
Posted by Kathy at 8:58 PM