What I Did on My Summer Vacation, Part 2

On the great Chapman family vacation of 2014, Daniel was only along for the first part (WA to PA), and Peter was laboring hard at Basic Training in Fort Sill, OK the whole time.  Once we had checked into the Wyndham timeshare resort in Williamsburg, Sunday rolled around again and Peter called to check in.  It was a momentous occasion, with the whole extended family checking in.  The picture probably doesn't do it justice: 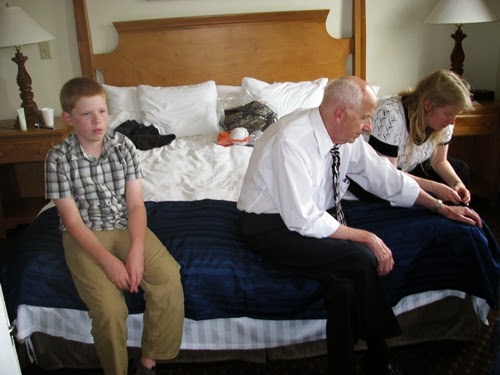 We took pictures of people talking to a smart phone on speaker mode.  Sound quality was iffy, especially on Peter's end.  But we got to hear about the things he was going through, and that little bit of contact had to sustain us for another week. 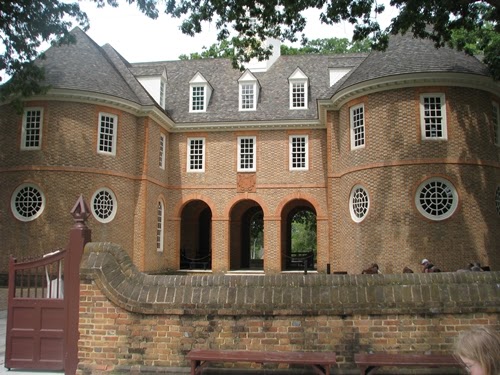 There is an incredible amount of history crammed into the "historic triangle" of Virginia (Colonial Willamsburg, Yorktown, Jamestown Colony.)  We bought a pass for our family of 4 that let us into quite a bit, but of course that meant we had to get our money's worth by going somewhere each day.  Truth be told, the girls would probably have been happy swimming at the hotel all day long.  Buy Steve and I, history buffs that we are, made sure they got out to see stuff every day! This is the Colonial Capitol at Williamsburg, 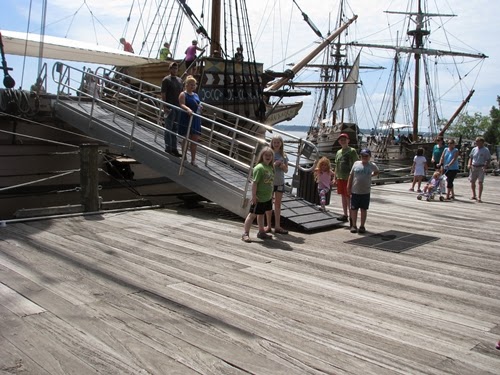 At Jamestown, you could board the three replica ships and imagine what it might be like to make the Atlantic crossing in the hold as an indentured servant or even an investor, confined for months on end to a tiny space on top of all your worldy possessions.  Colonists tried all sorts of industries -- glassblowing, silk, and wine, for example -- which failed to turn a profit, before finally settling on tobacco as the predominant cash crop. 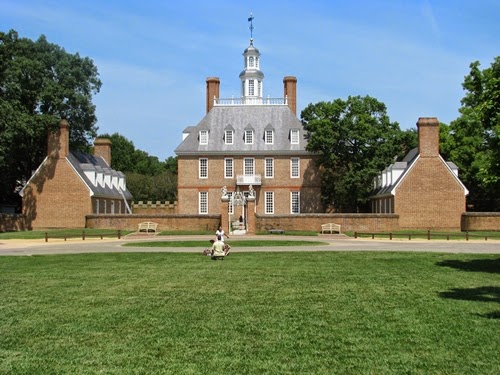 Back in Colonial Williamsburg, the view of the Governor's Palace.  We also had quite a lot of fun at the weaver's shop, the millinery, the gardens, the wigmaker's shop, the silversmiths, the blacksmiths, the print shop, the apothecary... just finding out how people lived in the old days. 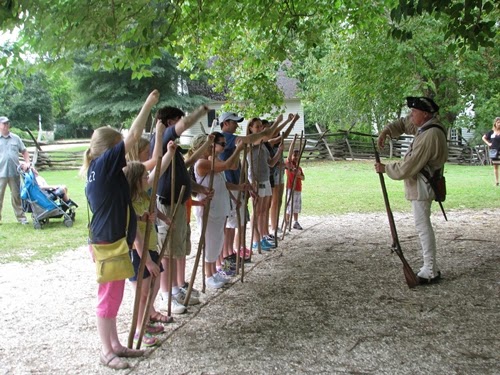 We accidentally enlisted in the Continental Army and fell in with a drill sergeant, who trained us in proper musket handling.  It was a little taste of what Peter was going through, and we all appreciated it.  Even though we were perfectly wretched recruits and (shh!) deserted immediately after our first musket lesson.  Fortunately, General Washington found better recruits.

The girls of the family had an afternoon date to the restaurant that invented Death by Chocolate, and there was a lot of relaxing and swimming and talking and eating.  Quarta really enjoyed making friends with her cousins, who are close to her age.  We even did a bit of outlet mall shopping.

Then it was time to go and for our family to start the long drive across country.  We made the first leg as far as Grove City, stopping at Paw Paw tunnel along the C&O canal in Maryland.  Steve really likes canals; think of them as the forerunners of the interstate highway system. 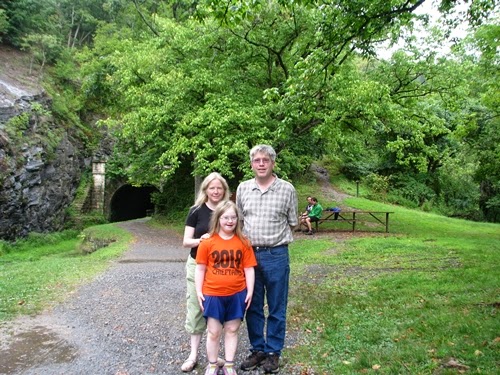 Somewhere along here, I must have picked up the tick that I found on myself in the hotel 12 hours later.  But no harm done, I think.  It's been a few weeks now and no weird rashes or anything.  Weird that I grew up playing in wooded areas, yet this was the first time to my knowledge that I've ever even seen a tick.  But on to more pleasant subjects...

We had a very nice visit with Daniel, went to 2 different churches with him on Sunday, and even had a peek at his dorm room.  The girls enjoyed seeing the college campus and we enjoyed spending some precious time with Daniel before having to say goodbye.

For our adventures along the Westward road, stay tuned for part 3.
Posted by Kathy at 9:08 PM