Randomday in advance, with homophones

Steve and I will be gallivanting this weekend, so I'm doing a Randomday post in advance.  I can do that, right?  I keep thinking of good blog post topics but not feeling energetic enough to do them, but I am saving up for some book reviews at least.

This one is for my 7th and 8th graders:


The Consul, after taking counsel with the council, stepped to the radio console and gave a speech to console the public after the tragedy.


All of these homophones or near-homophones have a Latin equivalent that is plaguing us, except for the radio console (they didn't have radio or gaming consoles in Latin, and if they did they might call it an "instrumentum," but that's just a guess).
Okay, that's all the Latin for now.  No, wait... there's more.  I'm currently doing the Latinstudy groups for Caesar's Gallic Wars and Bede's Ecclesiastical History of the English, have been for years now... and there is a brand new group starting up dedicated to Lucretius' De Rerum Natura, which I'm interested in joining even if it's a bit of a stretch for my ability level.  So the first assignment is due this Saturday, and I did it yesterday.  Addressing the goddess Venus as a kind of earth-mother life-force thing.  Anyway, all very interesting and we'll see how long I last.

I just today finished packing up all the Christmas decorations, but they haven't been schlepped down to the basement yet.

I declared today "Second Thanksgiving."  You know how Hobbits have second breakfast?  Since Daniel wasn't with us for Thanksgiving, and since I had an extra turkey in the freezer, I cooked it today and we invited Grandma over for supper too.  It wasn't as fancy a meal as real Thanksgiving, but we had mashed potatoes, stuffing, cranberry sauce, salad and mixed veggies, and now the kids will have leftovers while Steve and I are gallivanting.  Someone pointed out that it's technically "First Thanksgiving" if you go by the calendar year, which would make real Thanksgiving "Second Thanksgiving," but we won't go there.

Some people are not only finished with Bonnie Hunter's Easy Street mystery quilt top, but they've even got it quilted and bound.  I'm astonished.  This week, with school in full swing again and low energy levels, I thought I was doing well if I had time to sew at all.  There were two days that I sewed, and I got a total of four more blocks finished from the time I took this picture: 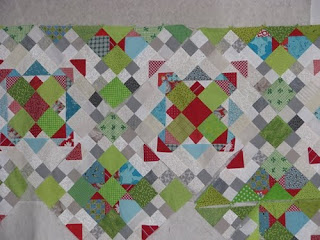 I'm also only making very slow progress on the socks I'm knitting for Steve.  I would really like to have them done.  But they're not.
Posted by Kathy at 10:08 PM

Always love your blog entries. Thought provoking always, inspirational too and amazing - love the quilts! Today the 'smile' I received from your blog is "Second Thanksgiving." In our home, I often have second breakfast . . . before and after my morning walk; one of the cats has a Hobbit physique and enjoys second, third, and fourth breakfasts when possible. Thanks. GWohio