I always want to spell "apocalypse" with two o's, and then it never looks right.  I'm glad we have Google these days.  Note to self -- two a's. 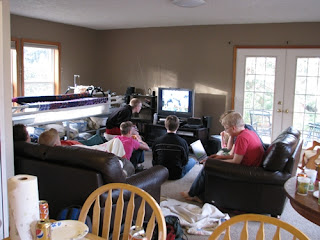 How do you celebrate the end of the world?  In our house, we let our teenage sons have a sleepover party, and then you'd never know the difference.  I counted ten total... four sets of brothers (including ours) and two singles.  Four college boys and 6 high-schoolers ranging from 10th-12th grades.  The menu: 7 boxes of Little Caesar's pizza (1 Hawaiian, 2 Supreme, 2 3-meat, 2 pepperoni), orange soda, caffeine-free Pepsi, diet Pepsi (you could have caffeine or sugar, but not both at the same time) and various other sodas.  A veggie tray - everything but the tomatoes got eaten.  And bean dip (1 large can refried beans, a packet of prefab guacamole, hot salsa, sour cream, shredded cheese, sliced olives, green onions, tomatoes in that order).  And two pans of brownies.  The entertainment: first season of Chuck, and various video games.  I think every quilt in the linen cupboard got used.  This morning Steve made a quadruple recipe of pancakes and three packages of bacon.  I'm pretty sure there wasn't enough bacon, but is there ever?  The recycling bin is more than half full just with pizza boxes and soda cans.

The sharp-eyed will note that the purple quilt is still on the machine, but it should come off today.  I had good intentions of finishing the binding of Jack's Chain last night while watching Jane Austen, but instead I made progress on grading while watching "Aisha," a Bollywood musical contemporary version of "Emma."  It was in Hindi with subtitles, but apparently there is quite a bit of English mixed in with modern Hindi.

Daniel's flight home Wednesday was delayed in Chicago and again in Denver, but he did manage to get home nearly 2 hours after originally scheduled, early Thursday morning.  It's great to have him back for the next weeks.

I've been experimenting with Pandora stations the last few days.  I've developed a mix of stations for Christmas music that I like to shuffle: Enya, Sufjan Stevens, Gregorian, Anuna, Celtic Woman, and Straight No Chaser.  I thought it had just the right mix of classical and contemporary.  But Secundus derided Enya as "old lady music." Hmph.

We've reached the point in Christmas preparations where we know it's inevitably going to happen, and I (for one) know it's not going to be perfect, but have ceased to care much.  We have to fit in a showing of The Hobbit sometime soon, and I am determined to make fudge and more Christmas cookies, but it is so nice not to have other deadlines looming.
Posted by Kathy at 11:21 AM

Thank you for hosting the reunion and all nighter! It sounds like they were well fed. No doubt they haf a great time. My offerings to send food and bedding were declined. They are accustomed to your gracious hospitality!

Thank you for hosting the reunion and all nighter! It sounds like they were well fed. No doubt they haf a great time. My offerings to send food and bedding were declined. They are accustomed to your gracious hospitality!