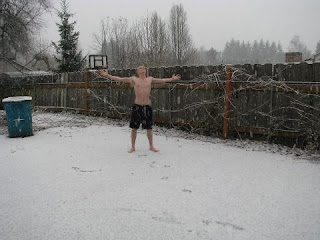 It's the last day of 2012, snow is falling instead of rain, and here is Secundus living in the moment.  A little after this was taken he drove in the snow for the first time and we bought some clothes at the store with Grandma's Christmas money.

Wrapping it up for the year: 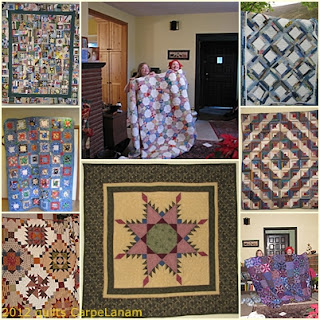 These are the quilts I finished in 2012. 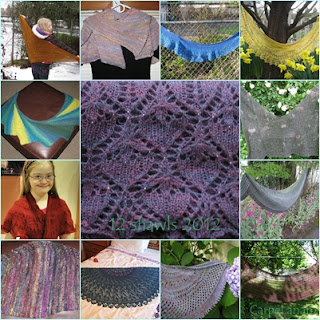 These are the 12 shawls I knit in 2012.  I also spun and knit one sweater last summer and am turning the heels on a pair of socks.

Final stash report for the year:

I bought no fiber or yarn all year, and I bought only a miniscule amount of quilting fabric (most of the added was gifted by family members).  So I think it was a successful year of using up stash.  I am going to allow myself to do a little judicious fabric shopping next year (I'm running short of white backgrounds for Easy Street), and I might buy yarn if I want to make a sweater, but no single skeins on impulse.  I still have a substantial yarn stash from reclaimed thrift store sweaters to shop for inspiration.

Goals for 2013 -- Well, first off we have the Last Noel this Friday.  After that, I want to knit socks for Steve and Daniel, finish the Easy Street mystery quilt, and clean and organize my sewing area.  I'm not anticipating doing any insane challenges like 12-shawls-2012 next year.  We'll just take it as it comes.

I made a double recipe of fudge this afternoon, and Steve is working on a double recipe of those candied fruit cookies now.  Spaghetti and meat sauce is on the menu for tonight and then pulled pork sandwiches for tomorrow.  Quarta picked out her new hamster this morning: it is a Russian dwarf hamster, female, named Winky.  She's a bit nippy but acclimating to her new habitat fairly well.

Happy New Year to one and all!
Posted by Kathy at 5:00 PM