Randomday - Wat's in the Crockpot

You never know wat you're going to get on Randomday!﻿ 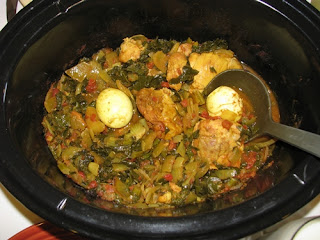 This one's for you, Dad.  I used a recipe from Stephanie O'Dea's latest book, but it's also on her website A Year of Slow Cooking.   Ethiopian Chicken Stew, also known as Doro Wat.  My mom always made it with beef and served it with pancakes, to replicate the injeera bread that is the authentic way to serve it.  It was always too spicy for us kids to eat, so we had a pancake supper!  But we might venture to eat one of the hard-boiled eggs that had absorbed some of the sauce, just enough enough to know what Wat tastes like.

I tinkered with this recipe a bit... I added chopped kale since I had it and I like greens cooked along with my meat.  I didn't have enough hard-boiled eggs, but that worked out okay.  And I didn't add water since I remember our family Wat being a very thick stew.

Add everything to the crockpot except the eggs.  Add water if desired, up to 2 cups if you want a more soup-like stew.  Cook on low for 6-8 hours, or high for 4-5.  Stir once or twice during cooking.  Add the eggs about 15 minutes before serving.

I served this with rice in the time-honored Bogue tradition.  It was very good, although I think the Wat spices blend that came from Ethiopia propbably had a few secret ingredients in it that I don't have in this recipe.  And as good as it was, I had a bit of an upset stomach for a few days afterwards... so go cautiously with that cayenne.  This is 1-handkerchief Wat, Dad.  You would probably like a full tablespoon of cayenne!