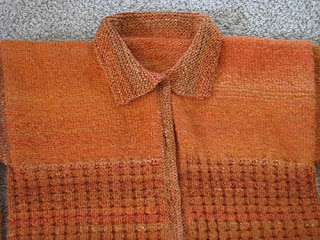 It was a squeaker... but it's done, just in time for closing ceremonies if I had watched them live.  Which I didn't.  I have several hours of Olympics still tivo'd to watch and really, no time to do it in. 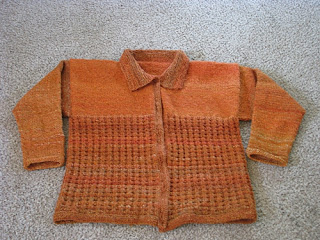 See, it really is done.  Except for the buttons, the reinforcing tape on the button band, and washing and blocking.  I love it.  Orange is the best color ever.  It's not my size, or I'd be tempted to keep it even though I own its twin.  Because you can never have enough orange.  It's a bit heavy to wear in August though.  I'll calculate tomorrow exactly how much yarn it used.  I spent a total of about 13 days knitting it, with not much else getting done on those days other than necessary stuff like cooking 3 meals a day and blogging.