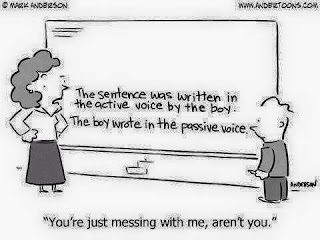 For many reasons, probably having to do with grading a mountain of verb synopsis quizzes, this resonates with me right now.  Of course, most of my students overuse the hyper-active voice.  It is late in the school year, final exams looming, energy at lowest ebb, and I am very grateful for a long weekend to take a last gulp of laziness before submerging for finals week and graduation.

I've been thinking a lot about legalism and judgmentalism in our culture in the last few days as the Duggar scandal unfolds.  For all that they are part of that Bill Gothard legalistic subculture (which I am familiar with because it was prominent when and where I was growing up, but thankfully I was protected from most of it by wise parents), I find it ironic that it is the side of anti-christian bigotry that is quickest to muckrake and form a mob of zealots rushing to judgment from the dark underbelly of the internet.  I'm troubled by the cui bono question - who benefits by bringing this up now?  Certainly not the victims, as I imagine how they are feeling right now.  I do face the challenge of how to explain to Tertia, who loves the show, that all the cute kids are gone from TV now.  But that's a 1st world problem, and I'm not wasting worry on it.

Another 1st world problem... I'm mildly jittery still from last night's movie choice - One Flew Over the Cuckoo's Nest.  Yep, I'd never seen it before, but it's a film classic that I suppose I needed to see. But I need to watch only light and fluffy things for the rest of the weekend now.

Tertia's school had an "Arts Night" Thursday with choir, orchestra, band and jazz band (all directed by the talented and very Hungarian Mr. Chartrey.  She has come a long way in choir, and I'm really proud of her progress there.  The theater ensemble also presented three skits, and then there was an art exhibit in the library.  I think Tertia has been lazy in art, (her piece was a page from a coloring book of a Quidditch ball from Harry Potter), so today I bought some watercolors and pastels and some sketch pads and I've decided that art will be her summer project, with Quarta as her art teacher. That should please both girls.

Peter is away at a Senior beach retreat this weekend; Quarta had an end of 7th grade party.  Daniel has a part-time job for the summer, which is great news, and still looking to take on more.  We will be having an influx of family for graduation week, and we have made arrangements to replace the roof after that.  Quarta is booked for two different summer camps and we are trying to get Tertia some day camps as well. So it will likely be a very busy summer.

And my new favorite thing is the Bubble Tea food cart on 78th street.  Blended Thai tea with Boba pearls.  I could go there every day.