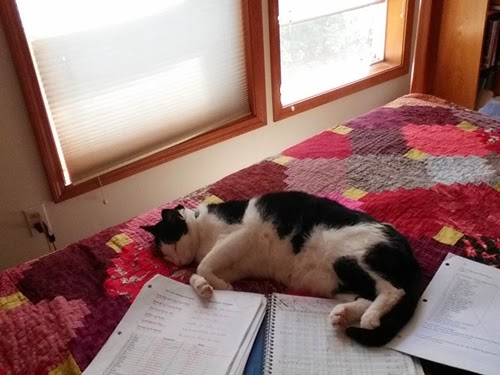 At least someone is getting some relaxation during finals week.  If I could just train him to check vocab lists and verb conjugations...

All my final exams are graded now.  I gave them yesterday morning, and it's been about 9 solid hours of mind-numbingly tedious grading since then, I estimate.  I'm so grateful for the students who actually pay attention.  Their sentences, even if they make a few mistakes, are easy and quick to grade.  It's the ones who flounder, who write anything that seems close without trying to learn vocabulary at all (seemingly) who push me into despondency.  I have to write out the correct words, longhand, for every word, every phrase, every sentence they miss... so I'm basically taking the test myself for each one.  Do they realize how much personal attention they're getting?  No, they're in middle school.  Which is, essentially, the cognitive dissonance of my life.  By the time they snap out of the brain fog, they'll be breezing through high school Spanish and I'll be drilling the next set of awkward-age kids.  Ad infinitum, or until I can't do it anymore.

Tertia's school play, a new take on Snow White, was a lot of fun for her.  We went to Thursday's performance, and she gave her handful of lines very clearly, which was delightful to witness.  Today she had a cast party after the matinee performance, then swimming and a friend's birthday party.  She had pizza and cake two times.  The rest of the family enjoyed a cookout meal, grilled by Daniel, including extravagantly yummy salmon (what happens when I send Steve grocery shopping is he isn't paralyzed by the price of meat.  I'm still trying to follow my mom's old rule of thumb, nothing over $2 a pound.  Yeah, that doesn't work so well 30 years later).  I was just glad not to have to cook.

Daniel's allergies are really troubling him the last few days, especially as he has a job doing outside work now.  Hoping he is able to get them under control so he's not so miserable.

Recently read books: The Monuments Men by Robert Edsel.  If you have seen the movie, it is a bit of an eye-opener about how many liberties the movie took, and how much detail was left out.  It has the same theme, the task and difficulties of preserving civilization's great achievements, as How the Irish Saved Civilization, by Thomas Cahill.  Just several centuries apart.  There is something appealing about the idea of being a scribe in a remote Irish monastery, especially if I could help produce something as beautiful as the Book of Kells.  I'm also reading The Book of Lost Books by Stuart Kelly.  This last one makes for melancholy reading for a literature major.  An astounding number of ancient books have been lost to history.  It makes me wish for a time machine to go hunting for them.

Or maybe I should just get back to grading.
Posted by Kathy at 11:15 PM