"All me life flashed before me eyes.  It was really borin'."

So what has Carpe Lanam been up to lately, since she clearly hasn't been blogging?  Not much that is blogworthy, that's for sure.  I've been busy, yes.  I've been trying to shake the cold that has been plaguing me since Christmas.  Now, with the Ides of March fast approaching, is the busiest time of year for Latin teachers.  I'm kind of at the eye of the hurricane today, since I had the day off.  This is because my classes are all taking the National Latin Exam today and, by the very specific rules, the Latin teachers can't be present for that.  I guess they're afraid we'd coach our kids or something.  It's a welcome break, particularly since last Saturday I spent the day ferrying kids to the Latin Olympika, yesterday I was at school all day for an inservice, and tomorrow I'll be ferrying kids to practice for the Spring program, and next week will be both parent-teacher conferences AND the pretest for the final, and the end of the 3rd quarter is just a week after that. 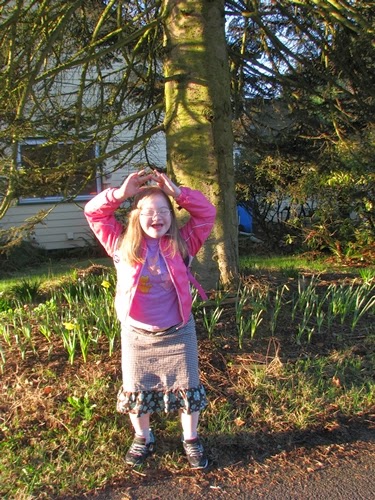 This morning dawned sunny -- wow!  And Tertia is naturally sunny.  She dressed up because she was supposed to give a presentation about rainbows in science class.  I started to try to steer her towards more carefully coordinated clothing, but then I decided that her ragamuffin chic fashion sense is pretty okay and anyone who doesn't like it is the one with the problem.  She wanted to pose with the other flowers.  She can blend in with the bed of daffodils, right? 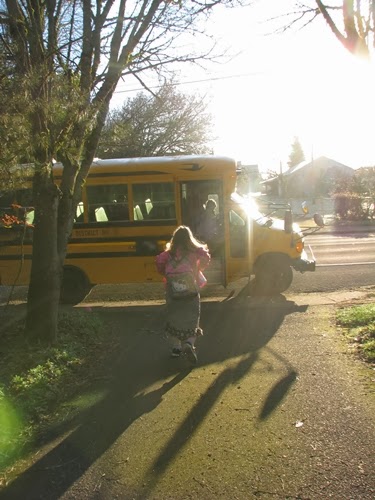 And just then the bus came along and she was off.  We had the big meetings last week for her evaluation and IEP... I'm impressed by how much her teachers genuinely like her.  It makes it a little easier sending her off to school when I can't be there with her every day to watch over her.  High School next year, though.  That's gonna be hard. 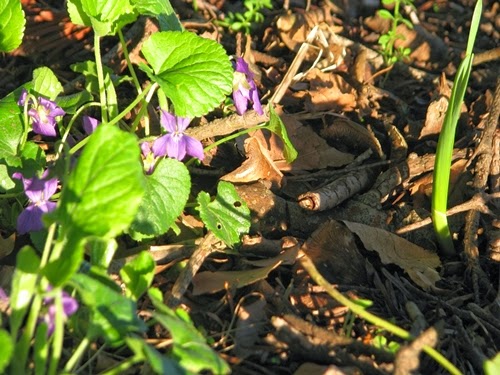 The violets have been pretty lately.  A few more days of this sun and I might be able to get rid of the sore throat/ cough thing. 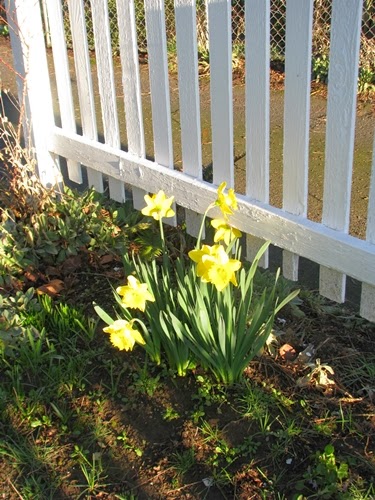 Daffodils.  That's what happening in our yard in March.  Lots and lots of daffodils.

Since there was no school for me this morning, I did my weekly grocery run early, when Winco is less crowded.  I had a couple of appointments already scheduled for the afternoon even before I knew I would have the day off.  I scrubbed a toilet and unloaded the dishwasher and cleaned Malvolio's fish tank for the first time in I'm embarrassed to say how long.  After a bit I will make Mongolian Beef for supper with this recipe I pinned, and then I need to take the girls to buy new shoes. 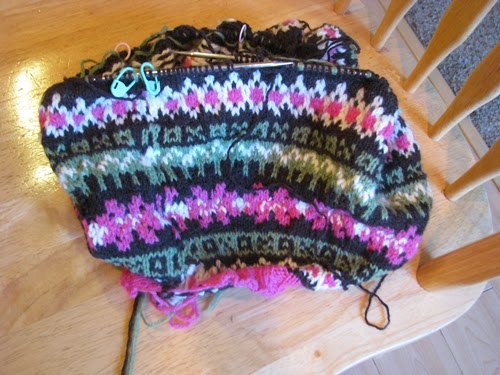 And - the knitting.  So yesterday I discovered a slight error in my math calculations for the yoke, picked back 1.5 rows and added two extra stitches on the section that will eventually become the sleeves.  I think I have a handle on it but I'm not completely sure even yet.  I need to lengthen the yoke by about an inch before I separate for the sleeves, and the speckled pattern has to be worked over a multiple of 6 + 1, and I am a better Latin teacher than a math teacher.  I'm craving an evening where I can just sit and knit, but that's not so very likely.  No progress on sewing or quilting this week at all.

Books in brief:
I've almost finished The Sweetness at the Bottom of the Pie by Alan Bradley.  I like it but I'm not sure I like the heroine, Flavia de Luce, a rather horrible 11-year-old girl with a disturbing interest in deadly poisons.  I recently finished Branded: the Buying and Selling of Teenagers, by Alissa Quart, a dated (ten years in popu culture IS dated) bit of social criticism on the over-commercialization of American teenagers.  It was assigned reading for all teachers, and I suppose there is helpful information in it, but it annoyed me with its hand-wringing without any prescription to fix the problem.  And since I believe the author is secular, I felt that the only prescriptive advice she would have given in any case would be for government intervention.  It made me a bit more cynical as we began reading the now thoroughly dated (30 years) classic, Amusing Ourselves to Death, by Neil Postman.  Can a classic be dated?  Well, it merits further discussion after I've made it through the whole thing, but I was annoyed at the outset by Postman's assertion that it is impossible to "do" political philosophy (or any other important work of the mind) on television.  Really?  I'm pretty sure that I've seen George Will, among others, "do" it many times, quite capably.  I'm working on an idea, something about reverse chronological snobbery and dystopian literature, as if somehow our era (or the 1980's, in this case) is the most at risk of cultural collapse of any era in human history.  But as I say, I should really bear with it through reading the whole book before I do a full book report.  This is just a teaser.  Speaking of cultural collapse, I am about halfway through Carthage MVST Be Destroyed, by Richard Miles, which provides a lot of insight into the decline and fall of a civilization that one of the 5th graders, bless his heart, guessed was located in Australia at the Latin Olympika.  Study of the ancient Carthaginian culture is very helpful to understanding ancient Rome and also the culture of ancient Near East in Bible times.  Africa, not Australia.

I would agree with your assessment of the teenager book without even reading it. Too often I think parents give up trying to partner their kids through the social culture. We keep involved with our daughters' lives and show them the pitfalls and dangers of the social culture. And we give them a base and confidence that they don't have to be in that world 100%. I love George Will! He is so spot on with his commentary.

Flavia de Luce is an annoying character, but if you stick with the series there is some development. You have to think about it as a long term process just like with some teenagers.