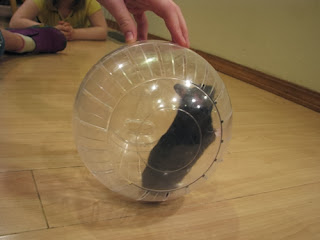 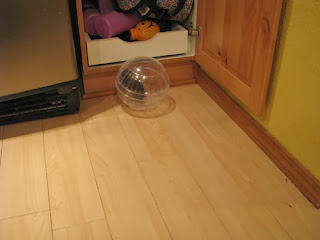 Muffball reportedly is terrified of her.  Of course, if you removed Muffball's fur, Pookles is almost as big. We had to get a new hamster ball because the mini one we used for the late Winkie (a Russian dwarf hamster) would not have worked. 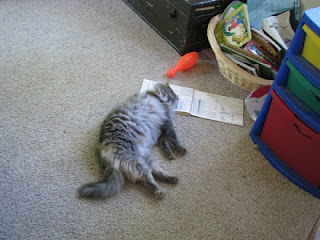 I made the Pioneer Woman's apple dumplings recipe today, with crescent rolls and a can of lemon-lime soda.  Pure yumminess.  I think it probably says something about both of our childhoods that I was puzzled about how to open the cans of crescent rolls, and Steve stepped in and said, "I've got this."  My late mother used to make both crescent rolls and apple dumplings from scratch.  I haven't made either one in at least a decade.  Book-knowledge will only get you so far in the baking world.  This is a great recipe for moms with kids to feed and memories to make.

A tiny bit of Christmas shopping was done today.  And Steve bought himself two pairs of New Balance sneakers, identical except in different colors.  His previous walking and gardening shoes both had holes or had come unglued.

One of the nicest things about the Thanksgiving weekend is having time to be lazy.  No Latin lessons to do today, turkey enchiladas were made, and mindless TV was watched.  A Dr. Who episode, too scary for me, and part of Finding Nemo.  Quarta played frisbee with the group from church, Secundus is hanging out with friends, and after the girls have their baths we will be watching Babe.  I'm about halfway done with the first clue in Celtic Solstice.  I did most of the cutting yesterday, finished this morning and started sewing.  I'm looking forward to taking some pictures when I have enough done to show.