Secundus' birthday was today - 17.  He spent it on the bus to the district meet in Tacoma and back.  He's an alternate to the varsity runners and didn't get to race, but seems like it was a good opportunity anyway.  His team did well and he'll get to go to State next week, we think.  Again as an observer and support, kind of like the Vice President.  When he got back at 6:30 we had his requested birthday dinner of tenderloin steak, mashed potatoes, and apple pie.

Yesterday I didn't have to go in to school; no Latin so the Reformation Day festivities could proceed.  Quarta went as her namesake from the Bible, with the appropriate passage from 1 Corinthians (in Latin) as the sole clue to her identity. 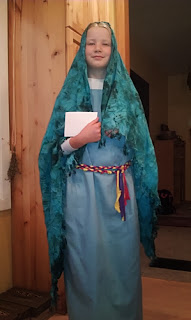 It was nice not to have to go in to school; my grades are all caught up although it was a painful marathon Thursday evening.  I made another large batch of gumbo, part for the freezer and part for church dinner tomorrow; and "shrimp and hotroot soup" from the Redwall cookbook for the church Reformation day party.  The skit this year was about the runaway nuns who hid in the pickled herring barrels.

I suppose I better report on last month's goals and set new ones for this month. October's goals:

So for this month, November, my goals will be:
More than that I know I won't be able to do, but there's no guarantee I won't try.

What a lovely Randomday post! Thanks for the picture of Quarta, she looks AMAZING! Your goals for November ... seems like it will be a full month!