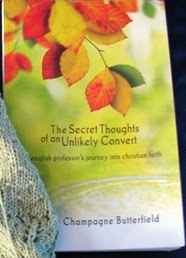 The SecretThoughts of an Unlikely Convert, by Rosaria Champagne Butterfield is my book review today.  It’s been a few weeks since I finished reading it, and while it’s a small book and a quick, pageturning read, I’m still finding myself fascinated by some of the issues it raises.  It is particularly well worth the reading for anyone with an interest in Christianity and culture.

Rosaria Champagne was a postmodern lesbian feminist professor of English at Syracuse University, working on a book denouncing the religious right, when she received a letter from a local pastor in 1999 and her world rather quickly fell apart.  She struck up an unlikely friendship with this Reformed Presbyterian pastor and his wife, leading to a spiritual crisis in her own life and a painful, messy conversion she describes as a train wreck.  Central to her conversion was the conviction that the Bible she began to study critically was both authentic and morally authoritative; and this changed her life radically.  She left her partner, eventually left her tenured position; lost most of what was once important to her in the process.  She is now married to a pastor and the full-time, homeschooling mother of 4 adopted children.

Pause with me a moment in wonder that not only did she convert from radical lesbianism to conservative Christianity, but she became an RP, embracing exclusive psalmody and a few other quirks that even most conservative Christians might balk at.  This is akin, in my mind, to Elijah's dousing the altar with water before confidently awaiting the fire from heaven: there is really nothing too hard for the God we serve; perhaps we should not be so surprised.

Rosaria Butterfield's book is making some serious waves in the Christian community.  You can see her interview with Marvin Olasky that originally brought her to a much wider audience, as well as other video and audio resources, here.

This is a tiny book but it contains the seeds of enough books to fill an entire library, and I would want to read almost every one.  When I picked it up, I expected a spiritual autobiography, and got it.  Rosaria has a fascinating conversion story, messy and painful and controversial as it may be, and one that can and should be retold to a wider audience.  This will undoubtedly take its place alongside Augustine's Confessions and C.S. Lewis' Surprised by Joy as a memorable example of the genre.  But it is also a small treatise on the topic of Christianity and culture, which is endlessly fascinating to me, and I’d love to see more from her on this topic.  Coming from the very different background she does, Rosaria challenges the church to practice hospitality, minister to orphans and those in distress, and engage the culture in countless ways.  She speaks with authority on this front because her own life was transformed by such simple acts.  She speaks with compassion because it wasn't a perfect, immediate transformation.

Her book is also an indictment of the secular postmodern academic world, with its fill-in-the-blank studies departments refusing to offer tolerance to anyone who doesn’t fit in.  I would love to see more of the autobiographical description of how she disentangled from that world and arrived at the nearly polar opposite of Christian homeschooling.  As someone who seriously considered post-graduate education but backed away from it because of the anti-Christian bigotry of the academic industrial complex, I'm curious about how to counsel my own children and students as they enter that hostile world.  How should the ethical Christian behave in academia, and what are some wise strategies to follow if we are called down that road?  Does she regret leaving it behind and does she hope to return to university teaching someday?

There is a bit of mostly gentle critique of the complacency of certain aspects of the Evangelical Christian subculture; e.g., reflexive criticism of public schools, bigotry against those with a messy or sinful past, unwillingness to consider adoption.  She and her husband lived and ministered for several years near Patrick Henry College, so having just recently read and reviewed God's Harvard, I found these aspects of her story intriguing.  Evangelical Christians would do well to read her book for the sole purpose of seeing themselves as the world sees us.  And of course, the attention-grabbing issue of homosexuality is front and center in the American culture war right now.  That's probably why the book is receiving so much attention; however, "outreach" to the gay and lesbian community is not really more than a minor focus of the book.

Even more minor in emphasis, but I can't let this review go without mentioning them: three areas of special interest to me personally.  There is knitting!  And Latin instruction (with a nod to the particular importance of verbs!)  And parenting children with special needs.  Bottom line: this is a must-read book for Christians who want to engage the anti-Christian culture compassionately.
Posted by Kathy at 7:01 PM