Once again it is Randomday, when the blog eats leftovers.  I spent my morning sleeping in (a bit), and then after Quarta opened a curio cupboard and had a hard time getting everything back, I got sidetracked on a bit of instrument repair that I've been meaning to do for awhile: 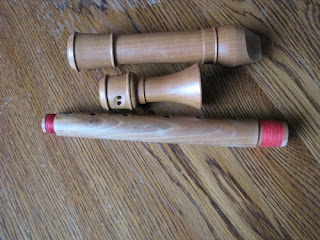 My dad's alto recorder from Holland, which I very occasionally play, had the threads coming loose on the joints.  So I used a teensy bit of wood glue and re-wound them.  I hope they stay in place.  I'm not really claiming fine instrument craftsmanship as one of my talents, but it pleased me for some reason.

The cats have been sitting on the ductwork in the basement, the ones that are insulated and wrapped in plastic and lead to the master bedroom.  Not coincidentally, I think, our bedroom has been getting no heat lately.  And poor Steve has a nasty cold.  The furnace repair guy came today, we are several hundred dollars poorer, and the heat is back on.

I went Goodwill shopping in Portland today and found 3 pairs of jeans.  I was particularly happy that all the pairs I tried on actually fit.  The last time I looked for jeans it was a lot more depressing.  On the way back I wound through picturesque Portland neighborhoods that reminded me strongly of my Grandma's old neighborhood in Middletown, Ohio.  And I visited a yarn shop that I'd never been to before.  So, a good day.  Now I will just try to avoid catching that cold... 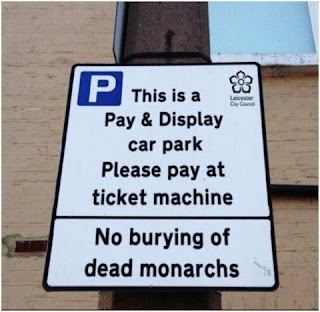 The city of Leicester in England was quick to revise its parking signs, apparently.

I have been honored with a special challenge for the blog, one that I'm working on but that will take a few more days before I can post it.  Stay tuned.