WIP Wednesday and sneak preview of "This Means War" 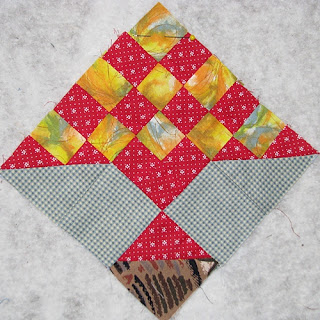 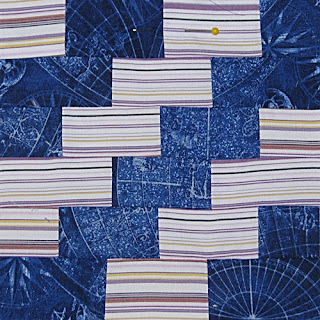 Block #92: Streak of Lightning.  I liked the purple stripes because they reminded me of the ozone-tinged lightning storms I watched in New Mexico when I was little. 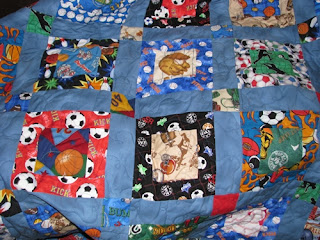 I finished quilting this "Play Ball" quilt that I will be donating to the Cedar Tree auction.  You can't really see, but it's an allover loop/squiggle that works pretty well and went very fast.  It now just needs to be trimmed even and bound.  It will be the third and final quilt I'm donating to this year's auction.

Knitting and spinning had very little progress this week.  I'm working on my third shawl of the year, Susanna IC's Oslo Walk shawl from Interweave Knits Winter 2010 issue.  I get a row or two done every day that I knit, which isn't every day because my elbow has been bothering me.

Yesterday Steve and I had our first dentist appointments in ... some time; then to celebrate Valentine's day we went out to Thai Orchid and were planning to see "Iron Lady" at the $5 Tuesday showing.  But at the last minute we found out it was canceled to make room for a sneak preview of "This Means War."  So we saw that instead.  Totally different crowd than for the showing of "The Artist" last week.  And totally different previews.

Cute movie... absolutely inappropriate for anyone who isn't married.  It's obviously inspired by the deserved popularity of "Chuck" but it's missing some of the heart and basic sense of morality that Chuck has.  Basic premise: Chris Pine and Tom Hardy play two CIA agents in LA (not sure why a Brit like Tom Hardy is working for the CIA, nor why CIA's LA headquarters should be so palatial, but it doesn't matter) who fall for the same girl (Reese Witherspoon, who is cute like Meg Ryan was cute in romantic comedies a decade ago).  They make some sort of "gentlemen's agreement" that the best man will win, and then shamelessly turn the entire resources of the CIA to opposition research.  Chris Pine plays the same type of irresponsible but rakishly charming character he played in the Star Trek movie, and Tom Hardy does his level best to combine "licensed to kill" with "sensitive new age guy."  Oh yeah, and there's this international bad guy who wants revenge for something completely unrelated and obscure, and of course the obligatory high-speed chase along LA freeways.

The success of "Chuck" has made it obvious that spy thrillers can be combined nicely with the romantic comedy genre.  In fact, I prefer this combination to real spy thrillers.  It doesn't take itself seriously, so it was a nice date movie and had some very funny moments.  It's rated PG-13 but I felt the language, general crudeness, and adult themes put it into R territory and I wouldn't let my teenage sons go even though they are big fans of "Chuck."  Gaping holes in the plot and characters make it highly unlikely it will be up for any Oscars next year.  But there you go.  I don't often get to see a movie and blog about it before everyone else in the world!
Posted by Kathy at 12:15 PM