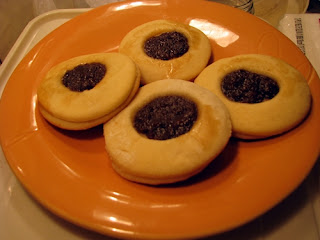 I was a party hostess instead of a blogger for the last few days, so here are some of the frequently asked questions about our Last Noel party Friday night.

Q. So how long have you guys been doing the Last Noel, your fabulously popular end-of-the-holiday-season open house?
A. It started when we were newlyweds in 1992, but it was before Christmas then.  It shifted to after New Year's when we had small children and were always travelling over Christmas.  There were several years when it didn't happen at all, but it's become an annual tradition since we moved out here.

Q. How did it get to be such a cool event?
A. Honestly, we have no idea.  We do not see ourselves as the kind of people who throw the coolest party of the season.  Hungry teenage boys, sloppy joes, and word of mouth might have something to do with it.

Q. How much food do you buy for it every year?
A. 15 pounds ground beef, 96 buns, 2 pounds of pasta and lots of assorted vegetables, 2-3 Costco sized bags of chips, 3 gallons apple cider, 3 gallons cranberry juice, 3 2-liter bottles of lemon-lime soda, 3 2-liter bottles of flavored seltzer water.  (This is more for my own future reference than yours).

Q. How many sloppy joes does the average teenage boy eat?
A. It appears to be 3.  Two if they are holding back, or ate before they came.

Q. Do you have to clean the house furiously beforehand?
A. No.  This is actually a key part of it.  We clean, but not obsessively, and the piles of papers stay pretty much in place.  The tree doesn't come down until after the last guests leave, although they may be invited to help undecorate if they wish.

Q. How many people show up for this thing?
A. It varies from year to year.  We had about 75 people this time; not as many as some years, but most of them stayed longer.

Q. Music?
A. We have about 15 hours worth of Christmas music queued up.  Steve is in charge of that.  He tends to favor Baltimore Consort and the choir of King's College Cambridge.  I like to add a little Vince Guaraldi and Mannheim Steamroller into the mix.  We both like all the Celtic Christmas albums.

Q. Was this year's Last Noel successful?
A. I'd say so.  None of the kids had nosebleeds or needed an ice pack this year.  The noise level was intense, but the crowd managed itself pretty well.  Serious conversations took place in the dining room, the boys headed upstairs to hang out with Primigenitus, younger kids in the family room, and various groupings of lively conversationalists in the kitchen and living rooms.  Muffball remained in deep hiding in the basement and poked her nose out at about 10:30 when she was sure everyone had gone.  We took the tree down and vacuumed most of the little cedar seeds and debris up before going to bed.

Q. Have you ever in your life been more tired than the Saturday after the Last Noel?
A. No, I don't think so.  I may recover in time for school tomorrow, but I am definitely not as young as I used to be.

Q. When are you going to share the recipe for those fabulous filled raisin cookies pictured above?
A. Tomorrow.  They're worth waiting for.
Posted by Kathy at 10:05 PM