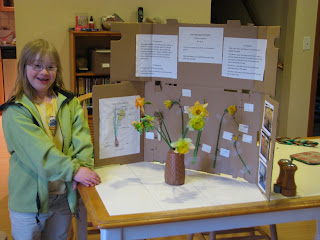 My favorite 5th grader did her science fair project on daffodils.  She learned the parts of a daffodil and a little about how it works.  We put daffodils in water that had food coloring added to it: red and blue, and one daffodil in half of each.  Interestingly, the parts affected by the red food coloring dried out faster than the control, and the ones in blue actually stayed fresh a little longer.

I had daffodils on the brain for some reason when I suggested this project.  This is what it looks like in front of our house in March and April: 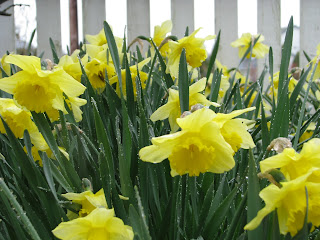 I like Emma being color coordinated with the flowers. Very nice.