There and back again. And puzzles. And games. 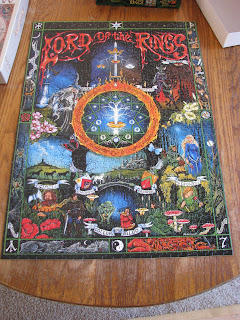 I'm playing catch-up this week after a weekend flight down to Arizona to visit family.  I hadn't seen one sister for 5 years, and had never met my little niece, who's now almost three and impossibly cute.

My nephews are big on playing board games; I came up with a simplified set of rules for Risk for the 5-9 age range.  We eliminated the cards altogether and played only one army on every country, with 2 attacking dice vs. 1 defending die.  Except if you held onto an entire continent for a whole turn, you got a little city to put on any country you wished, which when attacked would require 2 higher than your highest number to conquer.  And any time you defended a country on your continent, you got to roll 2 dice.  It actually worked out fairly even, but my 6-year-old nephew shows good aptitude for world conquest. 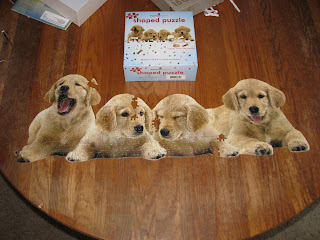 The puzzle craze continues ... the Lord of the Rings one is not missing any pieces, and will be saved for another time.  It was also popular because it was colorful.  By contrast, the puppy puzzle, purchased at Goodwill, was missing about 8 pieces and no one but me really enjoyed the odd shapes and monotonous color scheme.  The poor puppies had to be euthanized.

First week of the third quarter in school -- so I have just finished a furious frenzy of lesson planning and grading.  Also fast approaching is Saturday's Latin Olympika at Veritas School in Newberg, at which my students hope to win undying glory in a quiz-bowl type contest.  I don't really have to do anything for it but watch it, now that I have divided the students into teams of four and given them clever names.  I will also hope no one gets lost on the way or comes down sick.

Since I have so much fun inventing games, here's a favorite classroom game for any of my fellow Latin teachers who might read this.  It's called "Thumbs up/ Thumbs down," and is used to turn correcting an exercise of Latin-into-English sentence translation (which is pure drudgery, trust me) into something students actually enjoy and learn from.  Here's how:  Say you have 10 students.  Make sure your assignment has at least 10 sentences (or get creative about having 2 up at a time).  First student up dictates his translation of sentence 1 to Magistra, who writes it on the board, confirming the spelling and other nitpicky details: "Is this what you wrote?"  Then the other students have a 5-count to vote thumbs up if they think the sentence is correct, thumbs down if they think it is incorrect.  If the sentence is actually completely correct, every student who voted thumbs up gets one point; the student who was up gets one point for every correct word (et, in, de, ex, etc. do not usually count).  If the sentence contains one or more errors, the students who voted thumbs down get one point; then you go around the room in order from the person who was up, and give each student a chance to correct a word (and explain his correction) until no more corrections are necessary.  If it is a correct correction, that student gets one additional point; BUT if he makes an incorrect correction, he must also forfeit the point he got for the thumbs-down vote.  The "it" student gets one point for every correct word.  Students who voted thumbs down but never got a chance to make a correction still get their one point.  Play continues in sequence around the room until all students have translated one sentence.  Then, if there are any extra sentences in the assignment, there can be a bonus round: Magistra writes the correct sentences on the board and students get one additional point for every correct word they have in their homework, but take away a point if they put in an extra incorrect word.  Student with the most points wins a Lemonhead, or whatever Magistra has in her candy box.
Posted by Kathy at 6:54 PM