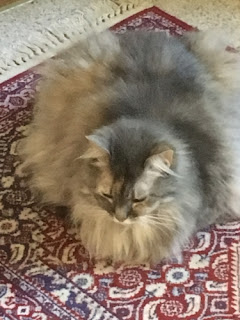 More back-blogging today. Last time I talked about my machine quilting situation, I was upset with the cat... 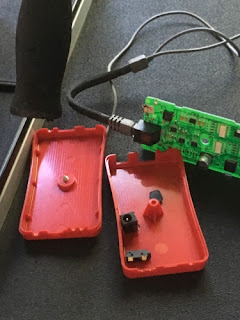 who did this to the stitch regulator while the machine was dis-assembled for other maintenance. The "Quilter's Cruise Control" that came with the machine set-up 11 years ago would cost $500 to replace. That is not going to happen, at least not for some time. 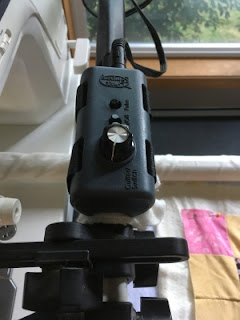 This speed switch also came with the set-up. It would only cost $70 to replace, because it doesn't regulate stitch length. Basically, it is a replacement for the foot pedal, with a dial to adjust the sewing speed once you click the switch. So I set it up and loaded "Grand Illusions" onto the frame. 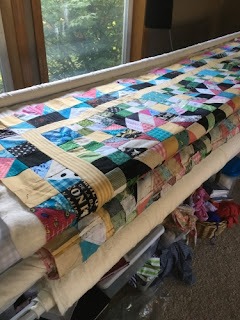 Grand Illusions was the 2014-15 Quiltville mystery, and one of my backlog of quilts needing to be quilted. 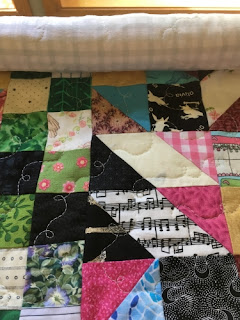 I determined to push through and learn how to use the new (to me) switch setup, despite the lack of a computer brain to regulate the length of the stitches. At least it was easier to set up. And really, once I figured a good setting for the speed for me, the quilting went smoothly. There is only me regulating how long or short the stitches are, but I've had years of practice and it's not that bad. I decided to stick with squiggle-loop-star, easy on the stars, for this first quilt. 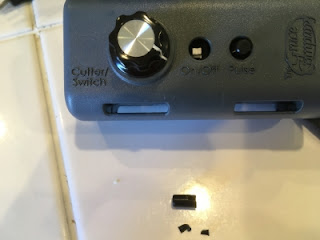 About a quarter of the way in, the cheap plastic cover of the on-off switch (center) cracked and popped off. I had to disassemble the switch to find the plastic bits that had fallen inside. It's roughly the size and shape of a push-button on a ball-point pen. Now you know why this is so much cheaper! Still overpriced at $70. I went to the hardware store to see if this was a standardized part I could easily replace. It wasn't. The employee I spoke to advised a pencil eraser cut to fit and glued on with a dab of superglue. 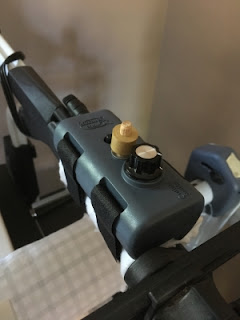 What I used instead was a wooden dowel with an old rubber thingy that snugs onto it. I'm still thinking about the dab of superglue to attach it, but at least now when it jostles and bounces out, it doesn't break and fall through. Analog solutions for the win! 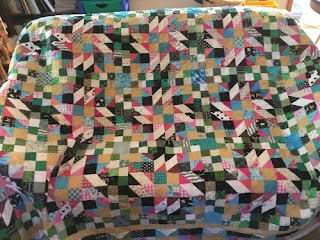 I finished quilting Grand Illusion in one day, even with the trip to the hardware store and fixing up the dummy switch. It requires more concentration, but it's so cumbersome to stop and start that you push through and it gets done quicker. I'll give the final quilt show-and-tell in the next post, but I was pleased that quilting is still possible. Maybe in my next quilt I will try a few more fancy figures.
Posted by Kathy at 5:00 PM