It occurs to me that I have been neglecting the blog yet again. I have several projects to share, and even a few photos to accompany them. So here goes. 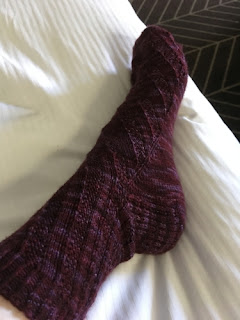 A cross-country plane trip is a good time to get some knitting finished. No trouble with the sock needles. These are the Sara Elin Socks by Vicki Bird that I started during the Lots of Socks KAL back in February. I finished the first sock, but not during the challenge time; then the second sock sat for a long time. It's a lace sock on size 0 needles, that's why. 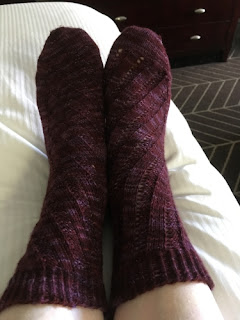 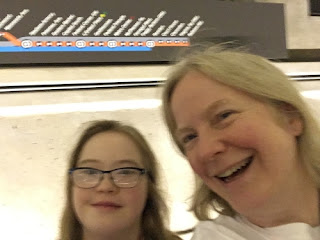 At the Metro station learning a different kind of public transit than she is used to. She thinks the name "Foggy Bottom" for a Metro station is hilarious! 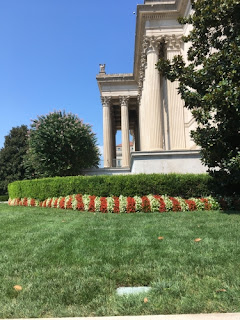 We went to the National Archives, where no photography is allowed inside, but we admired the patriotic flower beds outside! Seeing the Declaration of Independence and the Constitution was exciting for her. I loved the Magna Carta and would have stayed longer, but we wanted to check out the National Portrait Gallery (and American Art Museum). 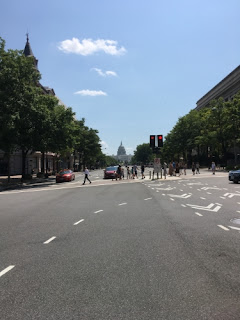 Crossing Constitution was the only real shot we had of the Capitol, so I took this while crossing. We looked at all the presidents' portraits in order, and she read the dates and is working on memorizing a few details on each one. Maybe we can convince her that memorizing facts about the presidents is better than Harry Potter trivia? 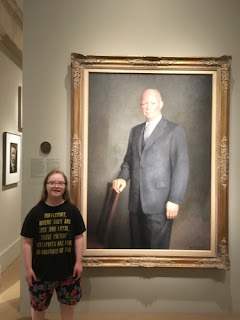 This is in honor of Eisenhower Elementary School. 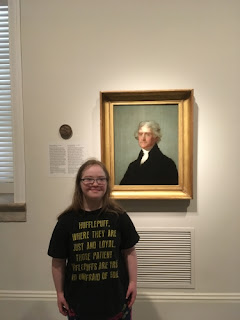 This is in honor of Thomas Jefferson Middle School. 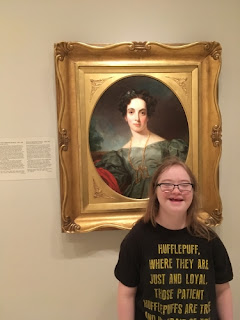 This one is just because she shares two names with the subject, and read it as we passed by. Her feet were getting tired by then, and when her feet get tired, we need to quit and go back to the hotel. 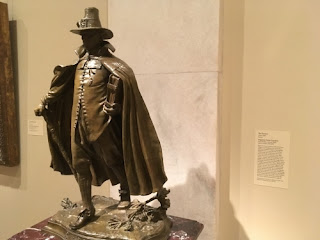 This is The Puritan by Augustus St. Gaudens. I've been doing enough genealogy lately to have come across a lot of Puritan Great Migration ancestors, so why not? It's cool. 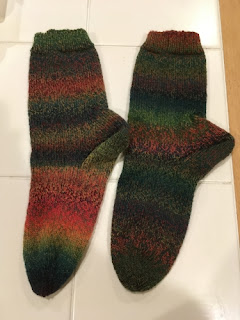 So, after that interlude of art and history...

These are the socks I started after the Sara Elin socks were finished. Thankfully on size 1 needles, and a simple pattern so the knitting went faster. It's Patons Kroy sock yarn, the first time I've tried it, and the pattern is Non-Euclidian by Sarah Jordan, another pattern I bought during the KAL in February. This is the second pair I've made from that pattern. I'm calling them Camp Socks because I worked on them over the two camps I attended this summer. They will probably be a Christmas gift...shh! I may want to buy more Patons Kroy sock yarn, because I liked this. It's a little heavier gauge than most sock yarns, and unfortunately lower yardage per skein, but a better price point. So that's the news on the sock knitting front. Next time: quilting.
Posted by Kathy at 10:00 AM