It is only fitting that 2016 should end on a random note, don't you think? From political developments to foreign affairs to celebrity deaths to the millions of strange events in everyday prosaic life, 2016 has contained a sizeable portion of the random. In the spirit of this blog's Randomday, where we try to celebrate and not judge, here's some more random for you to close out the year. 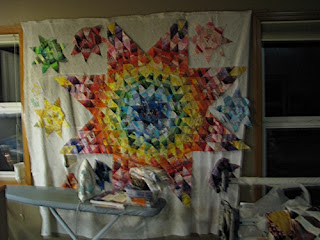 This is what my quilting design wall has looked like for about 2 years now. There must be some powerful quilting endorphins going around in the En Provence mystery quilt that I fell into, because after not sewing much at all until November, I'm not only keeping up with the clues, but trying to move along some seriously stalled projects. Like this rainbow string star with its little starlets, which I've been mulling over how to get to a square for more than 2 years. I had the Kona gray solid for the background, 5 yards, bought in November of 2014. 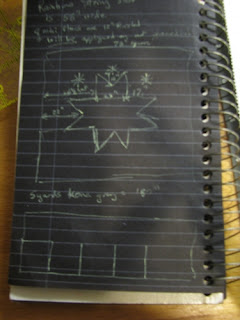 I decided I was never going to be able to do the math to piece the little starlets into blocks and then those blocks into the larger background. This is what I consider the "old-fashioned" way: I borrowed Steve's tape measure, took a bunch of measurements, then made a paper template for the side insets that are shaped like a house. I even doodled out a basic diagram in my little quilt notebook. 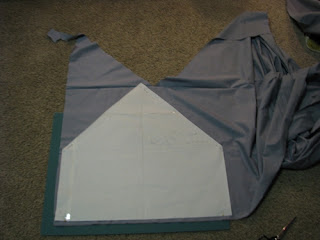 Just like cutting out a pattern in Home-ec class. 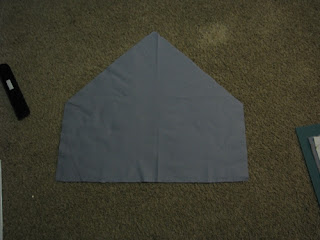 Okay, why is there a clean spot on my carpet? 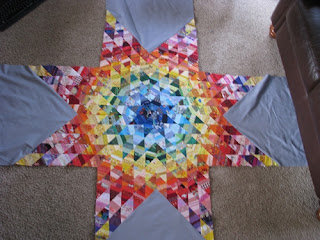 Here it is with just the side insets. 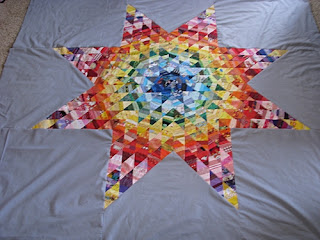 And then yesterday I cut out the squares. 26.5" square but it could have been an inch bigger. I guess I'll trim the side pieces. I'm sure those ripples will smooth out with a good pressing. 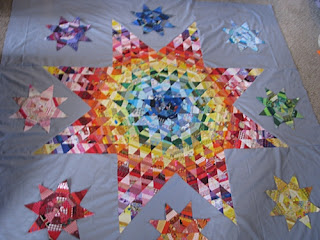 And the little starlets will be arranged thusly, and be appliqued down. I can handle applique a whole lot better than figuring out the piecing. There may be a rainbow scrappy square border with an additional outer border of the gray. What do you think? 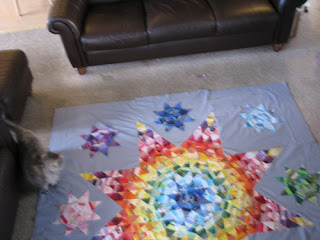 I tried to get a different camera angle and while I was doing so, Muffball just casually sauntered in and lay down. 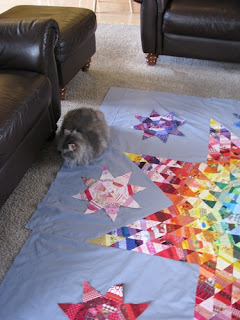 Apparently she votes for more gray. Won't make eye contact with the camera, either. She knows she's about to be scolded. 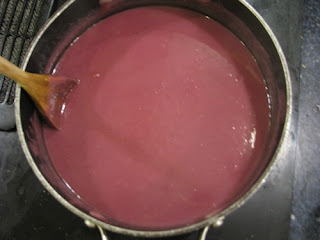 You should try the Stokes Purple sweet potatoes... they are very nice, not too sweet and pretty firm and dry, not mushy, when roasted. I made this Purple Sweet Potato Soup with a chile oil garnish with the ones leftover from Christmas dinner. It was good. I like the plain roasted potatoes better, and I would like the soup better if I used homemade vegetable stock rather than the soup base from a jar. But still, it's purple! I was going to say I'd never made purple soup before... but I have made Borsch. However, this is a different shade of purple.

Thursday evening before Daniel had to leave to catch his redeye back to Virginia, we played Rook with Tertia's new set of cards. I have fond memories of playing Euchre with Rook cards back in Ohio, when there were Baptists present who might have been offended by the presence of regular cards. This was the first time I had ever played Rook, which is just similar enough to Euchre to be slightly confusing. Also, whenever anyone declared "trump", Tertia got into a fit of the giggles and said "Donald Trump!" She couldn't quite figure out what the President-Elect had to do with her new card game.

We watched some nice movies and shows over break: Rogue One, The Secret Life of Pets, the BFG, some episodes of The Crown, and Henry VI part 1 and 2, of the Hollow Crown series. Despite having excellent acting, I felt they were a little too intense for Tertia, who loves Shakespeare but not gory battle scenes. We may bring out the video of Finding Dory tonight to try to rebalance things.

We went to a reception today for a wedding that took place in Texas a few weeks ago. It was a nice party to round off the old year. And as I watch Disney movies and stitch away this evening, I wish all the best to you in the new year: cowboy boots, fun fabrics and luxury yarns, good books, good music, good health, good friends, loving families and lots of laughter.