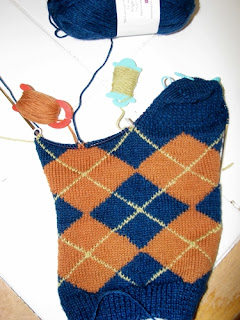 The first argyle sock is at this point.  I did the two repeats of the diamond pattern, then I worked a heel flap over the first half of the stitches, then turned the heel, and most recently I picked up 17 stitches on each side of the heel flap and worked the first row of the final diamond repeat on the instep.  Now it is a matter of decreasing the gusset stitches and finishing the final diamond repeat.  I feel the momentum is on my side!  If this pair works out, I might eventually attempt to size up the chart and make a pair for Steve.

What I am reading: I have two audiobooks going at the moment: The Titan's Curse by Rick Riordan, listening to that with Quarta on the school commute; and The Shadow Rising by Robert Jordan from the Wheel of Time series.  It's got 300 and umpteen chapters and it will probably be something to work on for the next two months.

Regular reading: The Life-Changing Magic of Tidying Up by Marie Kondo.  It hasn't changed my life yet, but I haven't really done any, other than killing flying ants. Does that count?  I finished Sejanus by David Wishart, in his Marcus Corvinus series of mysteries, and promptly checked out The Lydian Baker, which so far is much less political.  After Sejanus, I guess you need a break.  I also recently finished Rick Riordan's new book, Percy Jackson's Greek Heroes, which is a fun, wisecracking take on mythology, and is pretty much the logical conclusion of the way I annotate Myths of Greece and Rome for my 8th graders.  I also just started The Legend of the Rift, the final book in the 7 wonders series by Peter Lerangis. A horrid thought occurs to me; will I be able to justify reading all these YA adventures and Roman historical fiction next year, when I am no longer teaching Latin to middle schoolers? Or will I have to grow up and read adult best-sellers or classics of indisputable literary quality?  Nah.

Linking up to Ginny's Yarn-Along, where there are both masterful knitting projects and intriguing books to add to your queue.
Posted by Kathy at 5:00 PM