Works in Progress and a Reality Check

It was one of those "if you give a mouse a cookie" moments.  Although I still haven't been blogging much, I have been chipping away at various quilting projects in an attempt to get back to having something to blog about.  There is Allietare, with all the blocks finished and needing the setting triangles and borders: 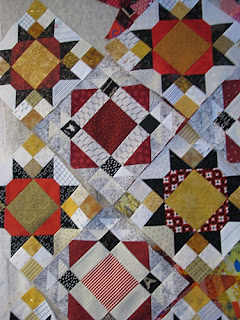 There is Grand Illusion, which looks like this at the moment: 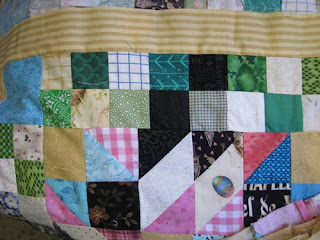 You'll notice I ran out of the gold constant fabric that shows up in the squares, and I had to substitute the gold stripe for the inner borders.  That's because, when I was playing catch-up last month, I mis-read one of the clues and I made 25 of each kind of 4-patch, instead of 25 of the one and just 4 of the other: 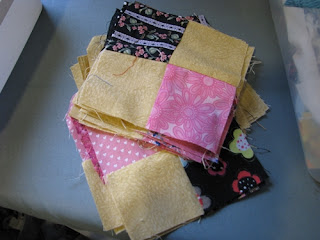 That means I have a lot of "orphan blocks" to use in a future project, and also I used too much of the original gold and had to use the other gold. But I actually like the stripe better, so it's all good. There was getting to be a large pile of fabric on my worktable as all these different scrappy quilts piled up, and I hadn't put any of the old fabrics away yet because I wasn't sure I was finished with them (and this was taken a few weeks before Christmas!): 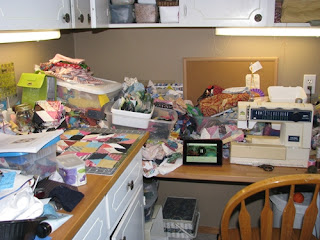 But! I never met a scrappy quilt-along that I didn't want to jump into, and some of the chatter on the Quiltville Facebook page led me to the 365 Challenge from Australia.  The idea is to make a block every day, and the ones they were starting with were easy and cute.  All 3" squares so far.  I decided to go scrappy blue and green, and added that to the mix (Allietare red, gold, black and neutral; Grand Illusion green, pink and aqua; and the flannel baby quilts and string quilts I had been working on as well).  Here's the first 19 blocks: 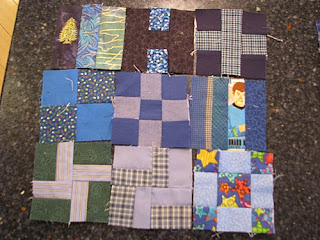 (Yes, that's Dr. McCoy in block 6, scraps from some boxers I made with Star Trek fabric). 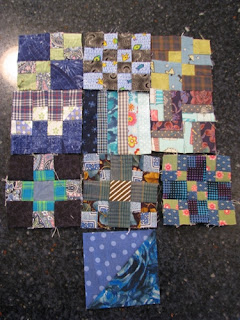 There's no denying they are awfully cute little blocks.  But little! Did I mention they are only 3"? I have no guarantee that all the different fabrics will work together, but I did make the Farmer's Wife Quilt a few years ago (even though it's STILL on the quilting frame) and that all worked out.  I certainly am not worried about running out of blues or greens.  But I'm not sure whether I'll stick with it all the way.  I think it's a sampler quilt that wants to be more matchy-matchy than I am necessarily willing to be. It's kind of cool, though, to be able to do tomorrow's block today because it's already tomorrow in Australia.  But I discovered, in one of those necessary reality check kind of moments, that the huge mess of scraps, bits of fabric, and multiple projects in my sewing area, had made me lose my triangle ruler.  So I went looking for it.  The more I looked, the more it wasn't there, so I resolved to take the necessary action and remove all the mess from my sewing counter and put it on the floor of the family room: 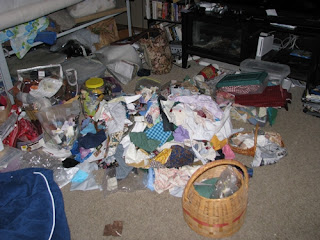 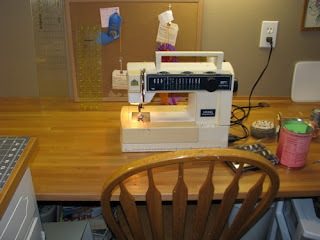 First I had to declutter around the sewing machine, and vaccum the lint and dust it nicely.  I raised enough dust that I have been suffering from bad allergies for the last few hours, and that's why I'm blogging now instead. 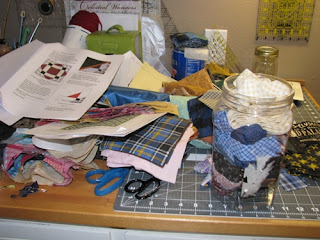 I'm happy to report that my cutting counter has now also been cleaned and dusted.  I'm using it as a staging area for cutting up the rest of my flannel into squares (I'm getting out of the flannel storage business by making a bunch of utility baby quilts that I'll eventually give away). Oh, but I did also find my triangle ruler -- it was under some of the other mess on the cutting counter, and I did go ahead and make tomorrow's 3" block. The clean-up of the family room floor is going forward; most of my fat quarters are now put away, as well as yardage. There are about 4 bags or bins of scraps that need to be cut into usable smaller strips, strings, or squares.  That's a lot, but I can manage it if I work steadily.  And throw out some of the scraps I don't like anymore.  I've been discovering quilt projects that have been neglected for a long time. Some of them I don't like anymore.  I will eventually have to make some decisions about priorities.  Maybe I'll get together a UFO list for the year sometime.  But I have learned one thing for sure:

Apparently 4 active quilt projects going at once is the point I start to lose things.  And the warning sign is when your cat starts sleeping on your fabric pile.  She has had to move: 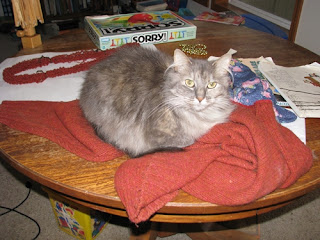 From on top of the lovely sweater I bought at Goodwill to unravel for yarn, Muffball rebukes me for taking on too much at once.  I know, I know.  I think I'll go to bed.  Tomorrow's block is already done.