Randomday - With an Actual Quilt Finish

This week we were blessed with back-to-back phone calls from our two college sons.  Peter called to report on how his classes are going, and let us know he is joining the crew team.  Exciting news for him and a new sport to pick up.  He is finding his way around the U.W. campus and his room has ended up being a single, which is fine with him.  He's taking classes toward a business major, including one on the hospitality industry, and two music classes.  He missed a lot of social opportunities by coming in as a freshman just this semester instead of in the fall, but I'm sure he'll be making it up in no time.  Daniel is in his final semester at Grove City, taking an honors English seminar and slated to write a seemingly impossible number of words per day, and figure out his future plans in the space in between.  The house has been quieter since they have been gone, and cooking for only 4 is strange.

Tertia's theater class put on a play this week: Cafe Rio, a series of vignettes from larger works on the theme of how theater addresses social justice issues.  So they had an opening scene from "Cabaret," a French Resistance scene, a bit from Anne Frank and The Boy in the Striped Pajamas, a bit about the arrest of Alan Turing for homosexuality, a scene from Anouilh's Antigone, a scene from Tesich's On the Open Road, and then Tertia's scene... she had no speaking part but was a background walker in a scene from "Mr. Universe," a play about two drag queens in New Orleans.  I'm not sure how it portrayed social justice issues, but Tertia walked her little heart out in the background and had a fine time doing it.

Quarta's friend G. came over yesterday evening for a sleepover; they watched the Star Wars episodes they hadn't watched the last time (6, 1, 2, and they are in the midst of 3 as I write), with some breaks for Target runs, frozen yogurt, sleeping, making makeup out of Crayola crayons, and doing their nails.

I've been following the East Coast blizzard news with interest; my brother Andy was planning on making his annual bus trip to the March for Life but it was cancelled and he is enjoying a snowy weekend at home in Virginia instead; I hear there are several busloads stranded on the PA turnpike, and it reminds me of the March for Life of 1989 when I was in a similar bus during a similar storm. 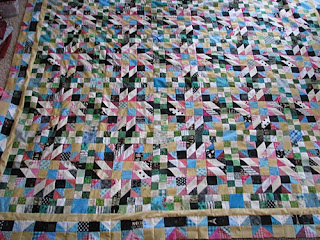 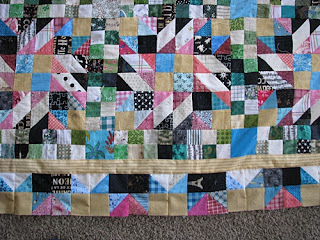 As Tim Gunn from Project Runway would say, "It's a lot of look."  Busy in a very nice, mid-century way.  It reminds me of my Grandma Maffett, her greens and blues, her black and white tile floors, and her favorite pink flowers. The individual fabrics are really whimsical and varied, though, which is part of what makes this type of scrappy quilt so fun for me to make.  Now let's see if I can get Allietare together.  And get some of these tops quilted.