I am trying to do a few catch-up posts on the blog, because I have really left quite a bit of life unrecorded in the weeks I have not been blogging.  And because I am avoiding cleaning the house and preparing for the company that is coming. 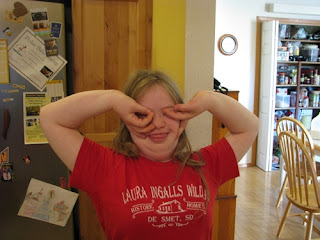 Let's lead off with this. The other day I was tearing off a box top label from a used up box of cereal, and I remembered being taught the "Up in the air, junior birdmen" song by my mother.  So I started singing it.  This was greeted with absolute scorn by Quarta, but Tertia was receptive to attempting the rather tricky hand-motions involved.  These generational priorities must be preserved, you know.  We had to do one hand at a time and I was a little worried about her poking her eye since I don't think the song is compatible with glasses, but she managed okay.

My dad underwent a scheduled, minimally invasive heart valve repair surgery in June, shortly after he returned home from his visit for Peter's graduation.  It was a successful surgery, although more involved and with a longer hospital stay than anticipated.  On Father's day, I was pretty sure this was how he was feeling as he waited to be sprung from the ICU/cooler: 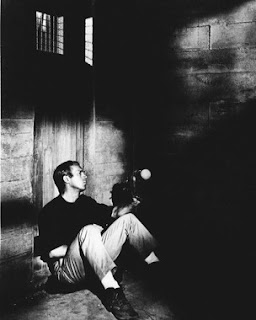 He is recovering well and as an added plus from the awkward position his arm had to be in during the 5-hour surgery, his painful frozen shoulder has apparently become unfrozen and much less painful. 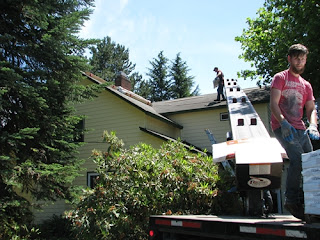 Supplies for our roof replacement were delivered and then a crew showed up to begin work the next morning. For us in the house, it was just really noisy and messy.  For the Hispanic work crew, it was sometimes 14-hour days, during a record heat wave.  I was really impressed with them and with their work ethic.  But I am glad the roof is now done. 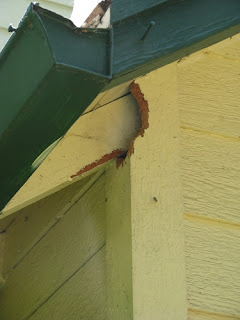 What I am not so glad about is the rogue squirrel that did this.  This is the little enclosed attic space (with no access) just above the front entryway and underneath the gable.  It gnawed through the peak of the roof last summer and we patched that (and then put on a new roof).  Now it's apparently trying to go in by a different way.  Not so happy with squirrels right now.  I go out and growl at it whenever I see it, and I have heard squirrels are dissuaded by peppermint and cayenne, so a special, spicy spray will be in their future. 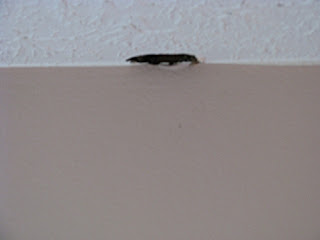 And this needs to be added to the "call the handyman list" as well.  This happened today, when I asked Steve to squash a spider on the ceiling of the guest room.  It was a very small spider; I guess there wasn't enough drywall in that particular spot.  This old house.  Now, the reason we were making a half-hearted attempt to tidy up the guest room is because we have guests coming, and we'll be fitting 7 more people into the house than usual.  This hasn't happened in a couple of years.  Here's hoping that the cousins are all good sports about being stacked on any available horizontal surface. 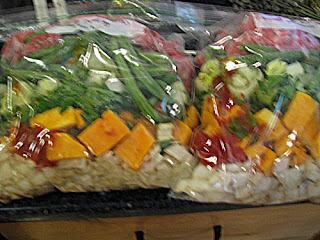 In preparation for days when I'm too tired to cook and/or family gatherings, I spent a few days this week and made a bunch of freezer crockpot recipes, in the once-a-month cooking style.  I didn't do all the prep and chopping one day and all the mixing the next, because of the simple fact that I can only ever chop one onion at a time, and this regime called for somewhere near 20.  But despite the incredibly tight shoulders and neck from doing this, I look forward to having easy meals ready to go. With these plus the 10 gallons of blueberries, our recently-defrosted freezer is looking pretty full again. 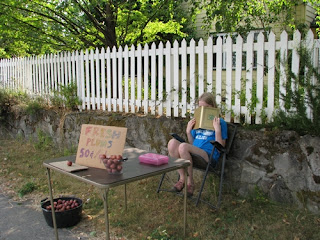 And speaking of things I hope not to have to freeze... the plums are ripe.  Quarta has been setting up a little farmstand, $.50 a quart, and has made a little bit of money while reading The Hobbit in the shade.  Not a bad way to pass a summer afternoon.  The plum tree has sent itself into a crisis this year, with several major branches breaking under the weight of the fruit.  We are going to need a tree surgeon to come in and work on it after the season. 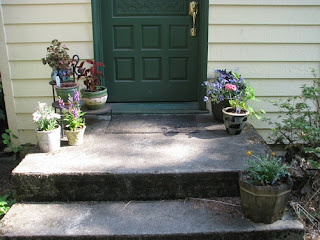 And I think I mentioned last time that my potted plants are the nicest they've ever looked this year.

I'm glad your dad is on the mend, good luck with the squirrel, and best of all - Love the Pic at the start. :) - Ms