I checked. It has been almost a month since my last blog post.  Not for lack of thinking about posts to write.  I like to write about almost anything.  But it hasn't been happening.  Here are some of the things that have been going on: 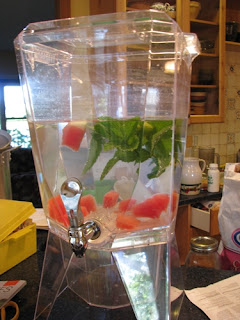 I bought a Costco drink dispenser for Peter's graduation party, and then I figured that, if you are supposed to drink half your body weight in ounces of water every day, the combined body weight of all household members is roughly equal to the capacity of the container.  So it's been staying on the counter and filled daily, with garnishes of fruit and herbs.  And then the next morning I have been using the leftovers to water the potted plants.  I have the best-looking potted plants ever this year. 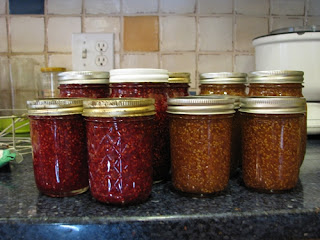 I taught Steve how to make jam.  Because there's never enough of the kinds of jam he likes.  So far he has made three batches of raspberry (2 red, 1 golden) and 2 of blueberry.  Plum season is now beginning, but I don't think he will be doing any of that preserving because he prefers the berries.

We picked berries, 4 of us plus Quarta's friend G., at the blueberry farm in Woodland that is so generously opened to the Cedar Tree community every year.  We had enough for the aforementioned 2 batches of jam plus a few pies plus 10 gallon bags for the freezer. The berries were big this year, and G. is a fast picker, and only took one shoebox full for herself.  I didn't take pictures of the berries, but they are the same color as the counter above.  So if one rolled away while cleaning it might go undetected for a while.

I have been taking a bit of a busman's holiday for the last few months, creating a Latin course for the Duolingo website.  This is not officially endorsed, but it came about because, at least 2 times a week on the discussion board, someone asks, "Why isn't Latin available on Duolingo?"  And given that they have Klingon and Esperanto, I think that's a fair question, but there is no official word whatsoever on a timetable for when it might be added, and would-be classicists are getting restless.  So I started publishing one lesson a week, replicating the interactive, gamified Duolingo format as closely as possible, and just posting the lessons on the forum.  Here is the link to the directory of lessons that I've made so far.  We are up to the third declension, and I'm having fun with it. 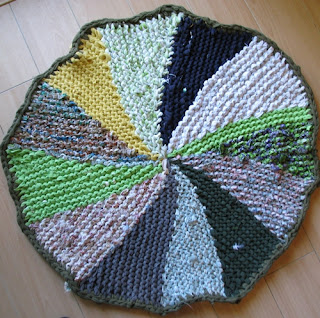 A dear former student of mine is getting married this summer, and I made this rug out of rag yarn (some t-shirts and some woven cottons) for a shower gift. I am getting back into knitting a little, or rather, I have been working at a slow rate all along and just not blogging as much.  I don't think I've shared my other two, close-to-finished projects yet: 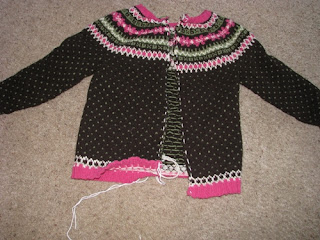 This is the Mint Chocolate cardigan that I started in the Winter Olympics last year.  I steeked it this spring and have not worked on the buttonbands yet. 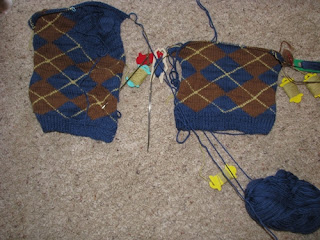 These are the argyles I started for Peter a very long time ago.  I am much farther along than this picture: working on the toes, as a matter of fact.  They should be finished soon, but he will be shipping off for AIT and won't be able to enjoy them until the fall. 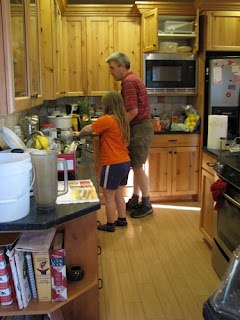 Tertia has been having the occasional cooking lesson. She made banana bread.  One of the eggs ended up on the counter instead of in the mixer bowl.  Oops! 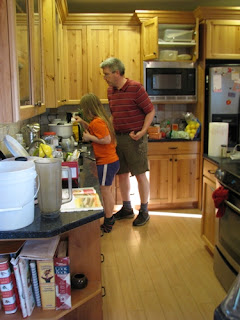 I have been trying to talk to her about future jobs she might have.  This is after finding out that in her class this year when they practiced writing job applications, she "applied" for only one job: Disney princess at Disneyland.  She refused to be persuaded at the time that any other job was a possibility.  I think we have made great progress: now she thinks she might like to work at Starbucks.

This has the feel of a Randomday post, and it isn't even Randomday yet! I will try to do a quick catchup with the rest of what's been going on for the last few weeks tomorrow.
Posted by Kathy at 7:47 PM