Randomday rolls around again.  The day the blog eats leftovers and doesn't complain.

Actually, I haven't been feeding the blog terribly often lately, so it's probably going to sue me for neglect pretty soon. 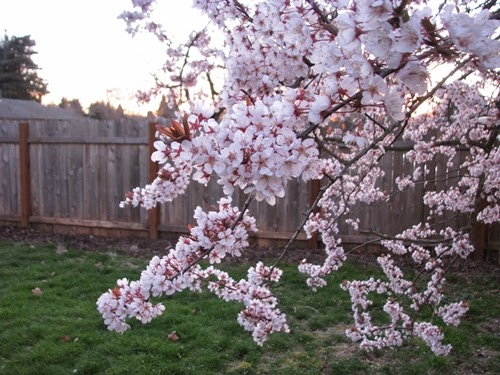 Just as last Saturday was beautiful, today is soggy and rainy.  The daffodils are looking waterlogged, and every so often I see a camelia fall from the tree with a kind of squishy thud.  The plum tree that I photographed a few days ago (above) has lost most of its petals now.  Time will tell whether we have a huge harvest again this year.  When we look back at pictures of when we bought the house in 1999, it's amazing how much larger that tree is.

I vacuumed up about 15 spiders from the corners of the ceiling in the living room today.  I also think I may have fixed the rumbling noise the vacuum has been making ever since we had to replace the band... it seems the plastic cover was not latched on properly so when I needed to fish a marble out of the brush assembly I was able to replace it the way it was supposed to be, and that must have been the source of the vibration.  Or maybe it's still making the sound and I am just wishful thinking that it is better because I need to feel appreciated.  This is also quite possible, 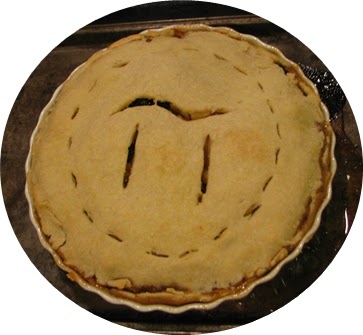 Quarta has been at a Minecraft... what? not seminar or symposium... maybe a class?  a geek-out session? ... at the library with other like-minded geeks in her age range today.  She came back very excited because she won her "creative" division.  Tertia has been bored.  Peter and some friends are having a gaming session.  Steve has been baking pies today, in observance of the Pi day of the century.  I'm not complaining.  We plan to take the girls out to see the Hobbit movie this evening.

Peter is training for a triathlon.  He joined the local LA Fitness this week and has been practicing his swimming.  I think our grocery bills are going to go way up, at the same time I am worrying about him losing too much weight.  Interesting how that works.

I received word today that the nurse who cared for me when I was a baby in the Netherlands has died.  Zuster de Vries, (Geertje I learned was her first name), must have been something like the Dutch version of "Call the Midwife," assigned to check on the ex-pat American couple and their puny newborn.  My mom told me that only foreigners and women with problem pregnancies delivered in the hospital in Holland at that time.  I was told I didn't gain weight fast enough to please Zuster de Vries, my mother worried a lot about it, ("nervous wreck" may have been her exact words) and still she became a good friend and steady correspondent with the family.  She never spoke much English so her annual Christmas greeting kept my parents accountable to use their Dutch at least a little.  She was unmarried and cared for her father, who lived to be more than 100, and she herself was born in 1920, so I guess she lived to a good age as well.  She always asked about me and sent a souvenir towel with the Groote Kerk in Dordrecht on it when she heard I was married.  I always thought it was a special thing to have been born in the Netherlands, and part of what made it special, maybe even a little romantic (like a fairy tale) was to have had a kind nurse who cared for me when I was a baby and still asked about me.  I am sad that I was never able to meet her when I would have appreciated it, and show her that I did indeed gain that weight she was concerned about.