Well, it's Spring now, and the weather is nice.  I picked these in our yard today; the daffodils were lovely for a few days before being battered by some heavy rains.  But tulips are my favorite, especially pink ones. 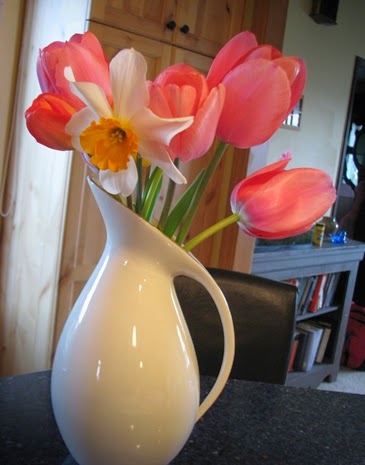 The third quarter of school is over now, all but the grading.  I can hardly believe how fast it has gone.  The third quarter is when things get a bit frantic, sometimes there is a shipwreck in the harbor ("naufragium in portu") and I always feel, even if it isn't explicitly stated, that the teacher is blamed.  March is the big month for Latin teachers: Ides of March, the National Latin Exam, the Latin Olympika.  And there is always a bad cold, or bronchitis, or laryngitis on top of it all.  Spring break is coming soon... it will be good to get a bit of rest.  I seem to be more tired than usual this year. 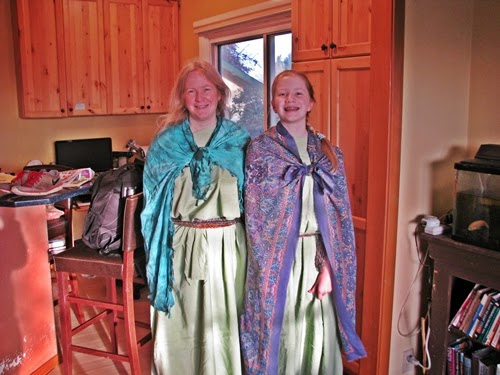 School had a theme day Friday, kind of an Ides of March (observed).  I took a break from grading Latin finals Thursday evening and whipped up a pair of mother-daughter stolas out of some old lengths of flannel.  I used this general pattern, and I didn't bother to finish the edges or anything.  But I did put a button and buttonhole closure on the left shoulder of each one.  They could be worn again the next time we need to dress the part of Roman ladies.  My Roman name, I decided, would be Carla Flavia Scholastica.  Carl's daughter, the geeky blonde one.  Of course all of Carl's daughters are blonde.