My Dad shared these pictures of my grandparents at a long ago Thanksgiving.  I remember them, their knotty pine kitchen, and their singleminded intensity about the preparation of good food so well.  On days like yesterday, my big prep day, and today, I feel the presence of a great cloud of witnesses, mainly my female ancestors, as I go about the rituals of preparing and serving the great American feast.  I do it differently, yes.  I throw out the giblets without a second thought; I don't make those noodles in the broth; I make whole-berry sauce rather than the chopped cranberry relish; I don't worry -- too much -- if I have fewer than four desserts; and I do make a double batch of turkey stock with the carcass, to freeze for soups later on.  I don't set the same beautiful table and use all the fine china.  But all the time I am thinking about Thanksgivings past, the story Grandma Maffett used to tell of the bank robbery by an inept branch of the Dillinger gang; the time Grandpa Bogue dropped the pecan pie and then stepped in it; the smells and tastes and memories of a blessed childhood. 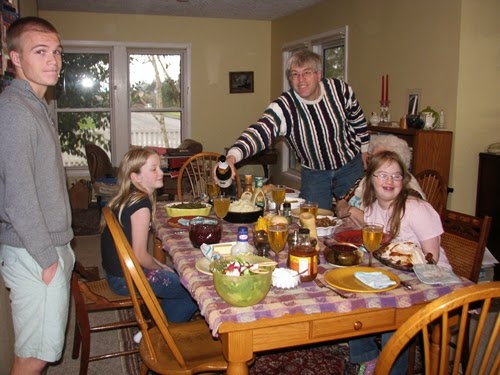 It was a little bit lonely without Daniel.  He's been on the wrong side of the country for three years worth of Thanksgivings now.  We did have a nice Skype session with him after the meal, but it's just not the same.  Tertia is the one who likes to pose for the camera, but she blocked Steve's Mom, so I had to take another one. 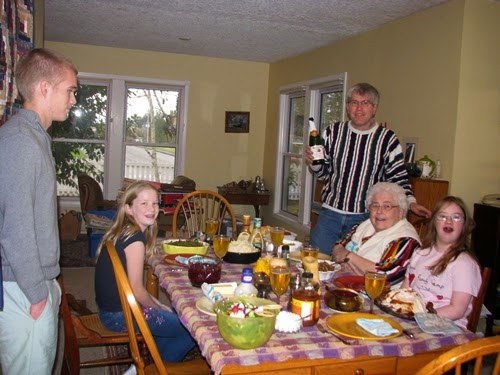 Yesterday, Quarta learned how to make cranberry sauce.  This is more or less the traditional whole berry sauce I've been making for years, with orange zest and a little orange juice. 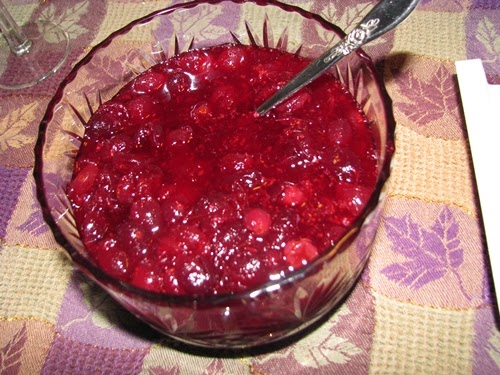 And the second is a sauce of cranberries and a quart of plums from the freezer, with orange zest, orange juice, ginger, spices and a splash of brandy.  It's a little less sweet but still, I think, quite good.  And for once we have enough leftover cranberry sauce, since we had the mother-daughter cook-off. 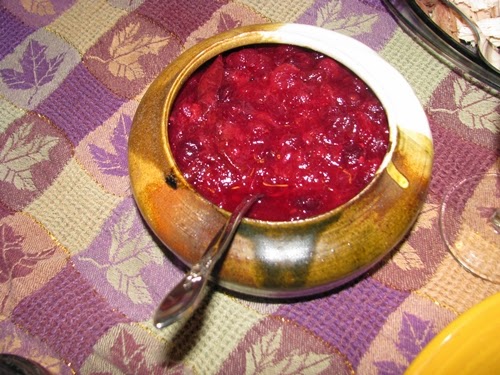 The pie-making yesterday was when I was thinking of my grandmothers the most.  I dithered as to whether to make the German Chocolate pie or the Chocolate Bourbon pecan pie, and German Chocolate won, but not before I had braved the morning crowds at Winco and bought a bottle of bourbon for the other.  I could picture my two grandmas up in heaven, one shaking her head about the bourbon, and the other one telling me to make even more desserts. It's a good thing I didn't.  For one thing, I don't have enough pie plates.  And for another, we were all so stuffed that we have plenty of pies leftover too.

All morning as I worked, I could see the 5-k turkey trotters from the local health club jogging down the street in front of the house.  Justifying their feast later on, I guess.  I'm of the opinion that the women who produce the Thanksgiving feast burn quite enough calories in the production process.  I know it's not the dramatic kind of exercise that all the neighbors can see.  But think about it; it's a long, steady sequence of little tasks that put you under a constant low-level stress, thus building up endurance and all-round muscle tone for anything life might throw at you.  Today alone, I arm-wrestled a nearly 20-pound bird and won.  There was chopping, herb-gathering, pantry-rummaging, lifting, fridge-stacking and re-arranging, mixing, stirring, timing, research into ideal temperature points, whipping of cream, browsing of last-minute recipes, delegating of chores to reluctant pre-teens and teenagers, carving, schlepping, whisking of gravy, and I even opened a champagne bottle for the first time (and ducking the backsplash, but not fast enough).  So, take that, turkey-trotters.  It's a much more enjoyable holiday when you don't fight the feast.
Posted by Kathy at 9:54 PM