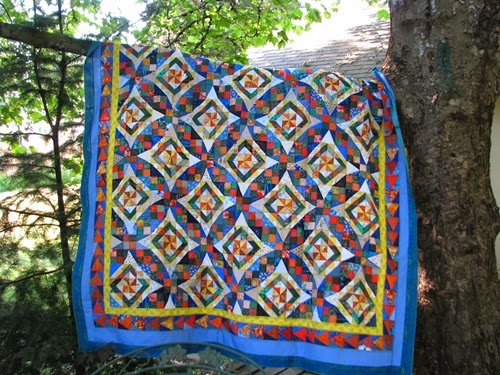 I have not been sewing much lately, and it's been wearing on me.  I haven't been knitting much either, but I've been working my way through it, better than the lack of sewing.  So today I had some previously taped Tour de France going in the background and I finally wrestled the rest of the borders onto Celtic Solstice, which has been languishing in my extremely untidy sewing room since February or so.  That was when I attached the yellow inner border and the flying geese pieced border. 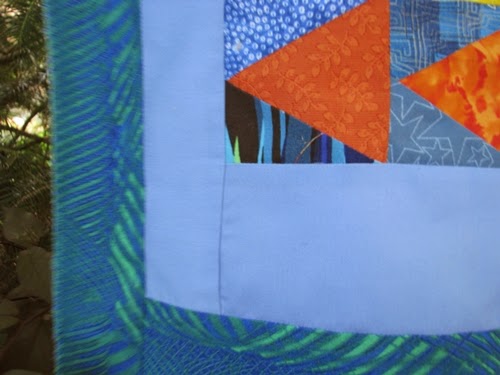 The biggest challenge was deciding what to use for the outer borders.  I rejected a second yellow border as being a little too assertive -- it needed some calming influence after all that sparkle and busy-ness.  I had some 4-5" wide strips of fabric from the epic estate sale of last year, but no yardage of either the light blue or the blue-green print.  I had to get a little creative to make it work, and the end result is a quilt top that is approximately 80.5" x 82.5" and used up - a lot of fabric.  I'm not really counting at the moment. 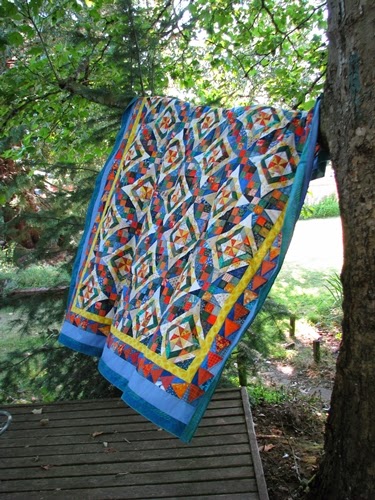 This is the FIRST finished sewing project I have turned out in 2014!  It has been a real wilderness for quite a while!  And yes, I know it's not technically finished until it's quilted.  But I will take it, especially as it looks so pretty blowing in the summer breeze over the limb of the sycamore tree.  Many thanks to Bonnie K. Hunter of Quiltville for the mystery quilt pattern and the fun of piecing.  The colors just sparkle together.  Cause for celebration!
Posted by Kathy at 9:03 PM