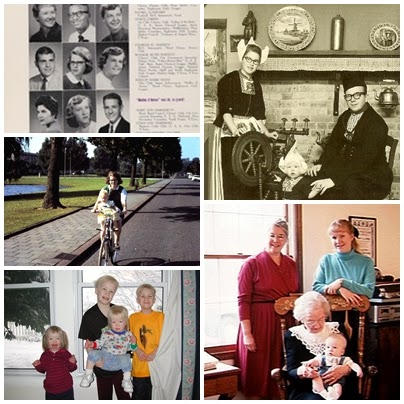 Class of 1958 and still classy ever after; riding a bike with me in the baby seat and posing for the obligatory tourist photo in Holland; 4 generations when Daniel was a baby; the grandkids as they were ten years ago.

Ten years since my mother went "Into the West" and only yesterday did I explain to Steve why that song always reduces me to a puddle of tears.  It started with one of the last telephone conversations I had with her, anticipating the upcoming release of "Return of the King."  How long it would have to be if it stayed faithful to the book, what they would have to leave out, etc. (Because in my family, literary criticism is a perfectly valid topic of conversations at all times.  Some family members feel irritated or left out, but that is just their tough cookies).  I think I said something like, "They'll have to leave out a lot of the slogging through Mordor so they can put in the spider and the battles and everything else."  And her reaction was surprising, coming from one who was slogging through Mordor herself.  "But that's important; they need to leave it in."  She may have had something profound to say about the nature of suffering.  I can't really remember.  The years have softened the memories and blurred a few.  She never did get to see the movie, but I always think of her in the Grey Havens scene.

So today I'm doing my best to walk the fine line between honoring her memory and perpetually reliving Groundhog's Day, 2004.  It's harder than I thought.  But I think she would be happy to know that Daniel and I talk literature a lot.
Posted by Kathy at 4:31 PM

What a lovely memory post. I love that your family talks literature at all times. My older son and I do that, too.