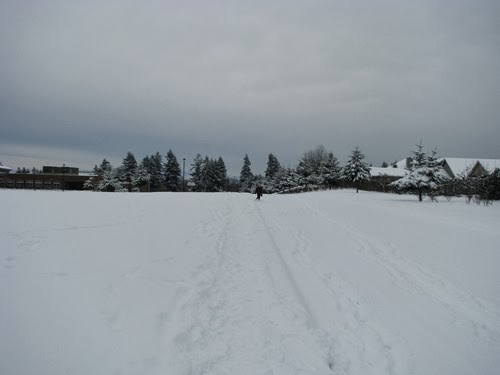 The elementary school across the street was cancelled yesterday, which made it the perfect place for sledding. 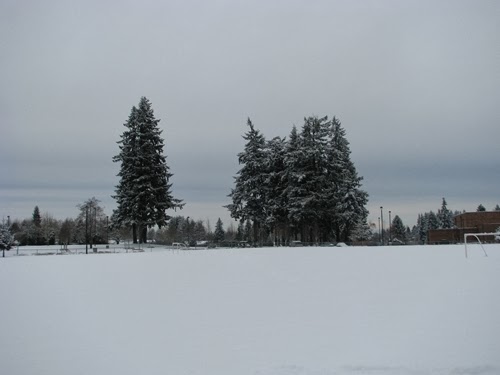 The trees are so tall and stately.  I don't take enough pictures of them. 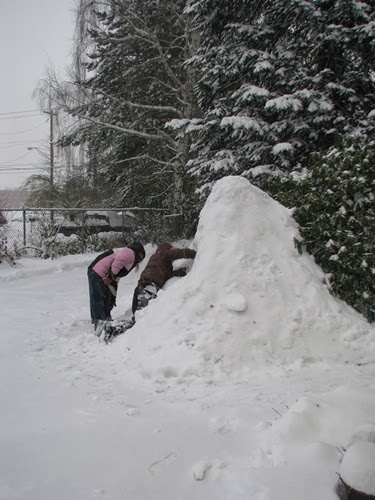 Steve put most of the snow he shoveled into this mountain, and the girls hollowed out a cave in it. 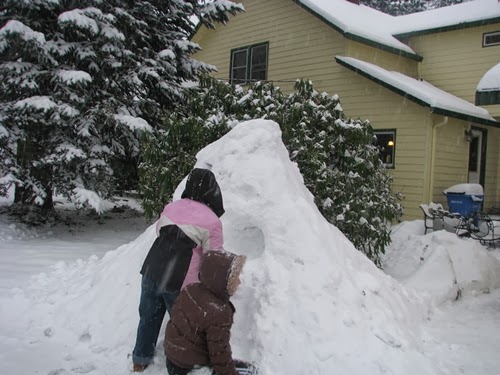 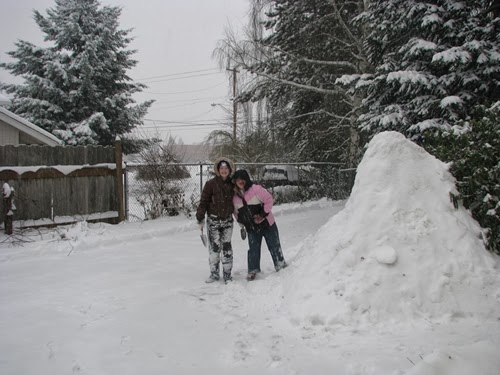 Quarta did most of the snowy work.  She must have inherited Steve's "must do something about all this snow" gene.  Because I would be perfectly content to just look out the window at it. 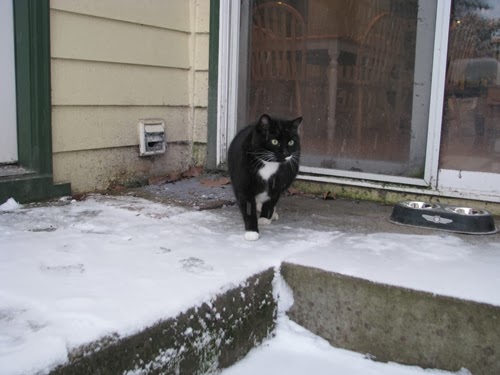 Poor Smudge.  He involuntarily became an outdoor-only cat a few years ago because of litter-box infractions.  He manages okay with his thick fur coat, but he doesn't like getting his paws in the snow and hangs out by the door meowing pitifully.  After I took this picture of him, he zoomed inside along with me and hurtled down the basement.  He hasn't been seen since.  There are at least three extensive crawl spaces for a cat to hide in down there.  He's a coward, and not very bright compared to other cats.  I wonder when we'll see him next? 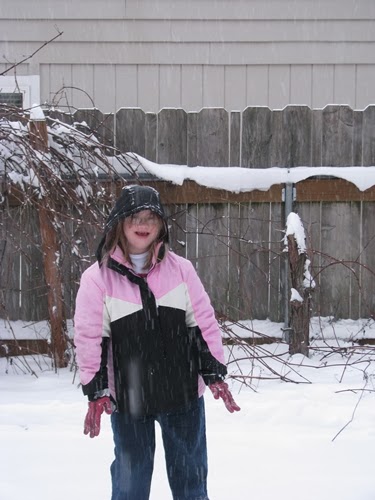 Tertia after the labors were finished.  She's fighting a cold today and has no real desire to go outside again.  She and I are the sensible ones, I've decided.  We'd be perfectly content, sipping hot cocoa, knitting or reading, and watching the Olympics. 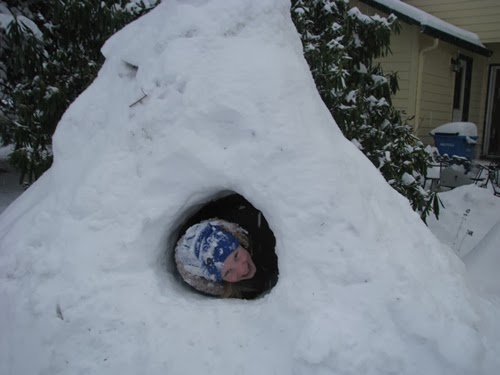 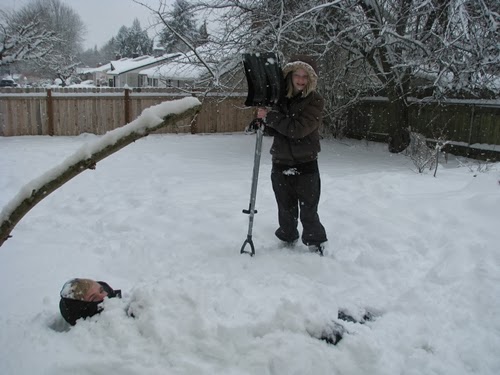 Today Secundus apparently earned this punishment by throwing some snow at Quarta.  He is a confirmed thrill-seeker.  He has been inventing every excuse to be allowed to drive in this snow. 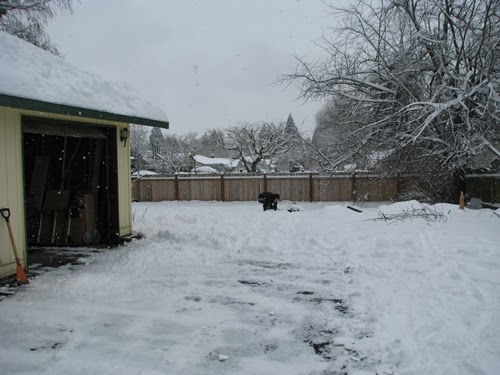 And then he buried her. 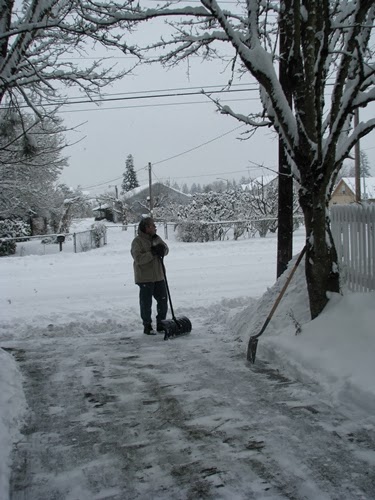 Steve was out again shoveling today.  I told him it was pretty pointless when it's still coming down and no one else is shoveling the sidewalks.  I told him it will change to rain eventually and be pointless again.  I told him it's pretty hard on the heart and he should limit himself to half an hour.  More than two hours later, he comes inside.  Apparently, he likes futile jobs where you move a lot of stuff from place to place.  I have him pretty well trained on laundry, too. 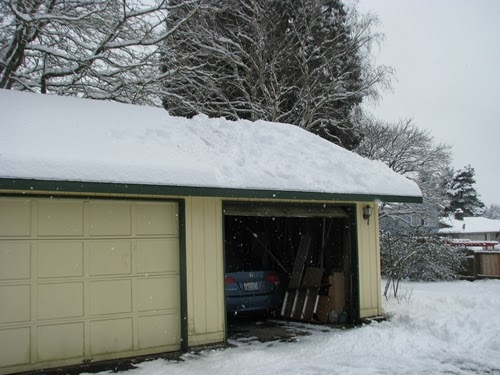 Evidence that Secundus has been climbing on the garage roof. 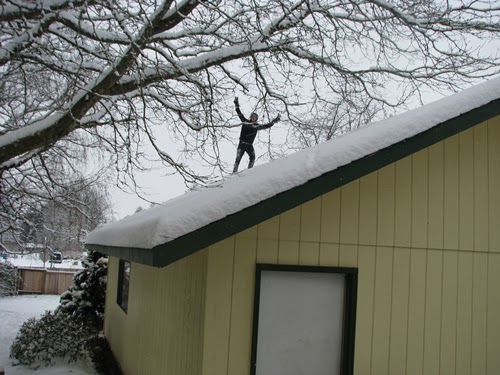 How are you going to top driving your friend to Salmon Creek in a blizzard, and then driving to Target in a blizzard?  Well, let's try some roof-climbing in a blizzard. 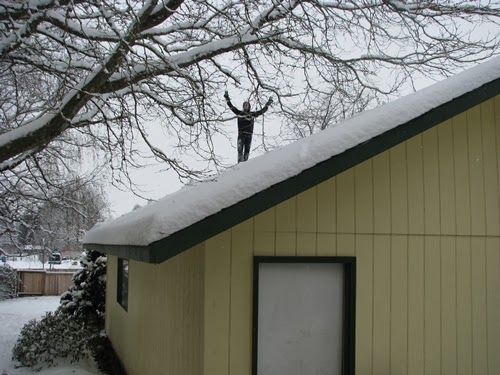 Make sure to strike a triumphal pose for the camera. 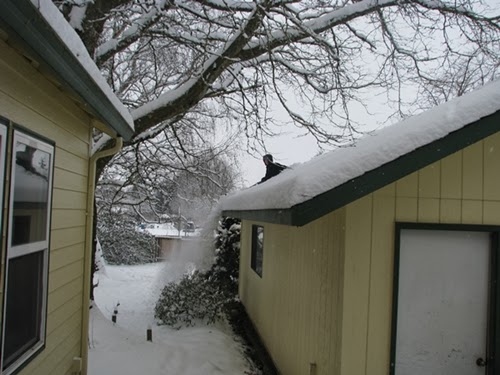 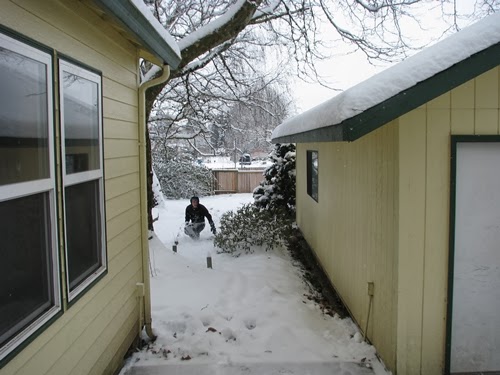 For some reason, I do not find snow days as relaxing as they should be.  I'm going to go knit, drink my tea, and stare out the window at the snowflakes.  Nobody call me to take a picture of anything, ok?