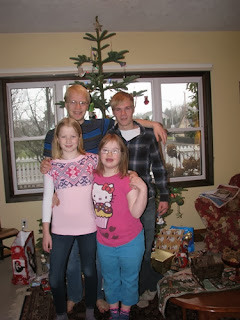 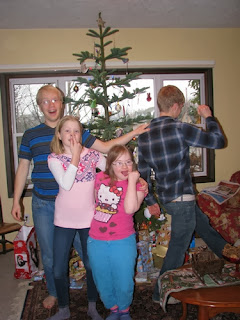 The obligatory silly picture.  I don't know why, but all modern kids expect to be allowed to do this as their fee for standing still for 30 seconds. 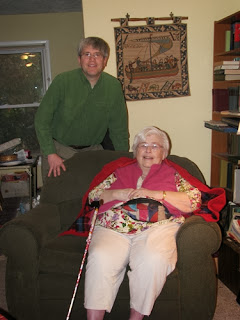 Steve and his Mom. 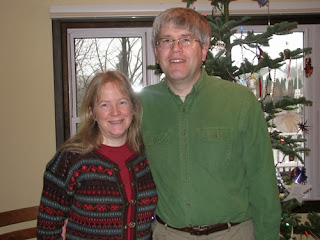 And the two of us.  Even though the kids and I were all in various stages of a nasty cold, we had a nice family Christmas.  I'm glad I didn't knock myself out cleaning the house, because it really doesn't look that much worse now than it did before. 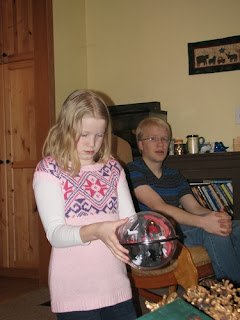 Quarta with her new puzzle ball.  It should keep her engaged for quite some time.  The farthest she's gotten so far is about 25%. 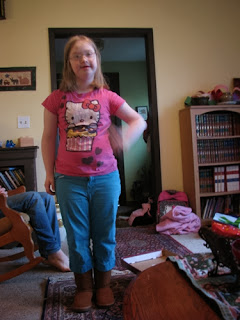 Tertia modeling her new boots.  We also pooled some of her birthday and Christmas money and got her a Samsung Galaxy tablet, which we hope will have some good therapeutic uses for her.  So far she has taken a lot of pictures and videos, sent emails, and read a bit.  Oh, and learned a few French words. 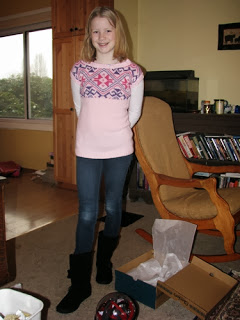 Quarta got some new boots too. 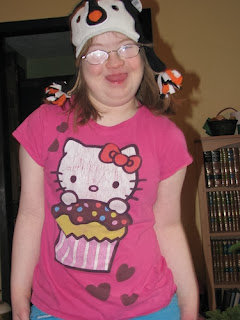 I bought silly hats for the kids on a whim.  This is Tertia modeling her penguin hat with her penguin walk.  Penguins have been a favorite animal since "Mr. Popper's Penguins" in 5th grade. 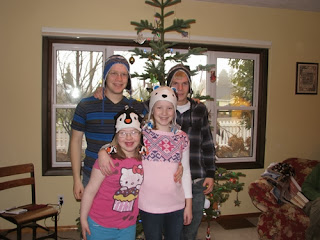 Quarta's is a polar bear, the boys are not so much silly as, I don't know what to call them.  They keep the ears warm and seem to be popular. 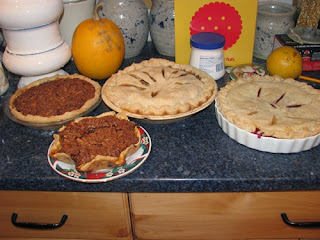 The pie board: I made an apple, a grape, and a mocha-pecan which made a little too much filling for one small shell, so I had an overflow. 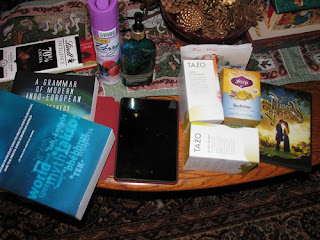 My "haul:" An Amazon Kindle Fire, an assortment of teas and chocolate, a can of air freshener spray (from Tertia via the dollar store), the Princess Bride, some nice eucalyptus-spearmint lotion, and Steve won the prize for coolness this year: remember when I requested, tongue-in-cheek, a Proto-Indo-European dictionary and grammar for Christmas?  I did this because I know enough about languages to know that Proto-Indo-European is a purely theoretical dead language and I didn't think enough of a reconstruction existed to even put a book together.  For linguists, it's the equivalent of the Holy Grail, and I've always had a fascination for really ancient history.  Well, Steve found two books on Amazon, one a scholarly work with the Oxford name behind it, and the other a scholarly work that seems to be an attempt to promote "Modern" Indo-European as a living language for geeks who like the Prometheus movie franchise.  Something about it being the language of the engineers?  I don't know, I've only scratched the surface of that and the Kindle.  So Steve gets lots of points for coolness this Christmas!

I can finally reveal my secret sewing project - I made two pairs of boxers for each of the boys and 4 for Steve.  If you find photos of such things distasteful, consider this fair warning... but I think of it as documenting my sewing and craft activities. 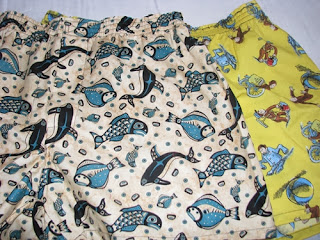 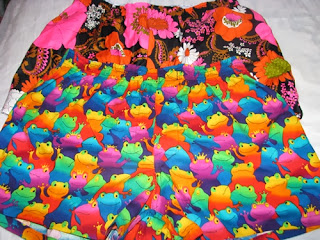 Psychedelic flowers from some vintage fabric - I think it may be rayon - and the multicolored frogs from remnants of fabric my mother gave me back when the boys were really little. 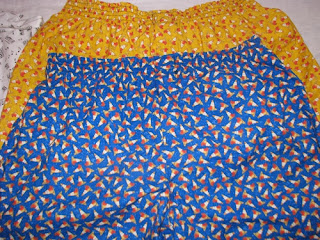 I bought the safety cone fabric in blue and yellow for Steve... 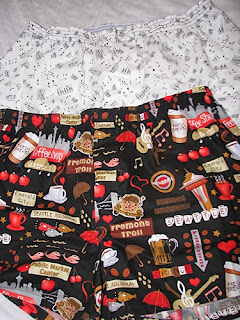 and also the musical notes and Seattle fabric.  It had been a long time since I made boxers and felt good to get an actual, practical and fun sewing project done.

Steve gives a "date with Dad" to each of the kids for Christmas and has taken the girls out so far - Tertia for bowling and Wendy's, and Quarta for Despicable Me II and pizza.  I took three of the kids out clothes shopping yesterday and will probably do more next week.  I've been working on getting to know the new Kindle and trying to get a good night's sleep.  For some reason I have been either not able to fall asleep until 2:30 a.m. or have woken up at 3:30 a.m. for the last 5 nights.  A little sewing has been going on, but not too much.

I blame President Obama and the insidious "pajama boy" commercial for spoiling my enjoyment of staying in my pajamas until late in the morning and even -- this should be criminal -- hot chocolate.  I mean, who spoils Christmas with political propaganda, smirking twenty-somethings in infantile jammies, and bad associations for chocolate?  It's enough to make me want to watch Duck Dynasty.  Well, not really.  What we have been watching: the Hobbit part 1 (preparing to take the girls to see part 2 sometime next week maybe), Wreck-it Ralph, Return of the King extended version, first disk (the girls just finished having Steve read it to them), and Tertia just watched an old grainy video of Harry Potter and the Chamber of Secrets.  Games, social gatherings and plans to watch Frozen are going on.  And someday, preferably sooner rather than later, I really, really need to clean the house.

Hope to get at least one more retrospective/goal-setting post in before the New Year, and maybe enough of Celtic Solstice to participate in the link-up.  But if not, you'll know I'm enjoying a certain amount of well-earned laziness and studying Proto-Indo-European.
Posted by Kathy at 3:22 PM

Fortunately, I have no television, so I have not seen the lamented video bit, and still love pjs until noon and a cup of hot chocolate. =) I love your Christmas pictures, thanks for sharing! Those hats are ... unique! =) I believe that somewhere in my stash lurks a piece of that frog fabric still - somewhere.