Randomday - Use What You Have 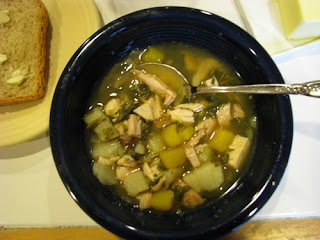 A good Randomday, like good soup, is made with available ingredients.  This was pretty good soup.  Leftovers of Costco chicken, an acorn squash, some assorted greens, potatoes, and a "clunk" of stock from the freezer.  (A "clunk" of stock is frozen chicken or turkey stock, and may vary in size from 4-8 cups.  I've been using the term since Secundus coined it for the 4 and 5-year-old Sunday School class cookbook.  His recipe, for potato soup, was one of the few ones that was actually possible).

Secundus celebrated his "Sweet Sixteen" birthday yesterday.  We had Filet Mignon and mashed potatoes, with apple pie for dessert.  Daniel skyped us from college.  His roommate was wildly successful in a game called "humans vs. zombies."

Today we added Secundus to the cell phone plan and got him his own phone.  It's definitely a dumb phone, not a smart one.  Don't expect him to start texting because it's not on the plan.  I have never texted in my life, and my phone is even dumber.  Its camera quit working over a year ago.

We took a jaunt into downtown Portland to the farmer's market in quest of Winesap and Arkansas Black apples.  We also picked up some cider and chestnuts.  It was a bit of culture shock, walking into the midst of all those hipsters.  On the way home we had lunch at McDonald's.  Quarta at first did not know what we meant by "Micky D's."  Tertia got it before she did.

Steve harvested the rest of the apples from our tree today and is working on his second large pot of applesauce.  We will really need to freeze some of it.

I finished grading the pretest quizzes today.  I give a pretest for the final exam that includes about 40% of the material, usually the most concrete and easiest to grade.  I secretly (or not-so-secretly) hope that most of my students will test out of this material so I won't have to grade it twice.  Because grading is becoming more and more painful as my classes get larger.

Literally painful.  So this week, in my ongoing quest to cope with chronic neck pain and headaches, I took the chiropractor's advice and had my first ever therapeutic massage.  I apparently have a lot of muscles I previously did not know existed, and every single one of them has muscle memory, and somehow all these muscles have got it into their muscle memory that they need to be in knots.  And now, every single one of them hurts.  I felt absolutely wonderful for the first 45 minutes after the massage, and then the pain started.  Now, I am noticing more and more that the way I hold my head while grading Latin papers is almost impossible to do without pain.  Maybe it will be good to be aware of all those previously nonexistent muscles, if I can figure out ways to do everyday tasks without hurting them.  I am going to try to be a good patient and do my stretching exercises, and drink lots of water.  But ow!

I need to enter the grades in my database and send out last minute advisories to some parents.  We've got a busy week next week with finals for the 1st quarter and oh yeah, a national election.

I've been thinking about how nice it would be if I could do just one Harry Potter spell.  I'd have a hard time choosing between "scourgify" and "reparo."  Even better might be one to grade papers.