Spinach Salad, and a Gaffe of Olympic Proportions 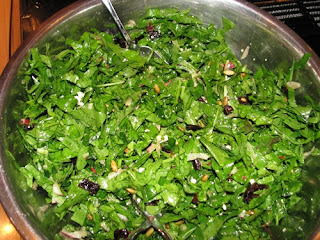 I made this recipe: Spinach and Radish Slaw with Crispy Chiles and Pepitas.  It's a bit of a production, and it makes a LOT.  I substituted red wine vinegar with a dash of sherry for the sherry wine vinegar called for.  And the only dried chiles I could find were "chiles negros" which I think had already been roasted before I stir-fried them.  The Pepitas are pumpkin seeds, which I had left over from my last batch of homemade granola.  This is a great salad, although rather soggy after the first day.  I'd make it for a potluck or cut it in half next time.

Have you seen the Ravelry tempest in a teapot?  Seems the U.S. Olympic Committee has sent a cease-and-desist order to Ravelry claiming trademark infringement, because of the Ravelympics.  (The Ravelympics are a completely volunteer effort, in which individual crafters challenge themselves to complete a knitted or crocheted item during the duration of the sporting event the USOC thinks it is promoting).  To add insult to injury, the letter claimed knitting somehow "denigrates" the hard work and competitive spirit of the U.S. athletes (but only the U.S. athletes... I guess the international competitors aren't going to feel threatened by the sweater sprint).  Hoo boy.  They probably know, now that it's gone viral, that it was a mistake to do this.  Here's Mason-Dixon Knitting's take on it.  Although I'm not a huge fan of Stephen Colbert, I can see him having fun with this and would stand behind him, just this once.  The USOC has issued a semi-apology and suggested that knitters might like to knit items and donate them in honor of the games.  I don't think this is going to happen, at least not as the payoff the USOC seems to hint at.  They have proved themselves decidedly un-knitworthy.  Even after the second apology.

Ravelry, much as I love it, can be a rough crowd.  Rough as in "don't let your underage daughter go unsupervised here."  Some boards are as innocuous and friendly as you would expect from a knitting forum.  Some, despite vigilant moderation, are so overpopulated that threads degenerate and get locked quickly, but not too quickly for feelings to be hurt.  And some are actually set up to be a kind of verbal cage-fighting; no-holds-barred, no feelings spared, mob psychology and snark in full force.  I suspect that the denizens of the latter groups will not be called off easily.  Knitters have not been this vengeful since Madame Defarge.  I'm just as glad it's corporate America in the form of the USOC rather than political and religious conservatives they're targeting, this time.

As for me, I've (mostly) given up on the contentious groups and avoid the overpopulated ones as much as possible.  I will be knitting my Ravelympics project and calling it just that on this blog no matter whether they change the official name or not.  And somehow, I think I will be doing my part to work the words "Olympics" and "Olympian" into my blog as much as possible, but not in reference to the international summer games located in the capital city of the U.K.  Those shall remain nameless, since I wouldn't want to infringe on the rights of an American company to think it has a monopoly on the use of the word that refers to them.  Or denigrate the efforts of soulless fat cats to prove themselves pompous jerks.
Posted by Kathy at 5:30 PM