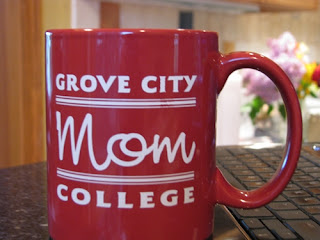 Primigenitus and Steve returned from their college visit trip this afternoon with the decision made, the deposit paid, and these words that I have a hard time believing: "The food at Grove City is SO good!"

I would not have heard this in the years 1985-1989 when I was a student there.  But apparently, it's all local and organic produce, and they have panini stations and omelet stations and even make your own stir-fry stations, like at the Mongolian grill.  No more of the choice of broiled cod or liver and onions.  Or the infamous "Ham Load."  (It was supposed to be loaf, but it really doesn't matter what they called it, it was not good.)

Consolation prize to Hillsdale: even though you're not getting my son, I happen to know you are getting a couple of other quality young people.  I was amused to hear about your game of Thatcherball.  I trust no disrespect is meant to the Iron Lady.  I also hear that Cocoa Puffs were served in the cafeteria for the first time after a long hiatus, and they were very popular.

And Princeton... what is up with you?  I know, personally, two quality young people, National Merit Finalists, that you turned down.  Really?  The time has come when the sensible people start to say, "Who needs you?"  There are better options. 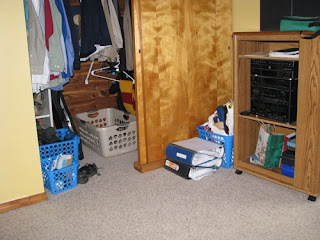 I tamed the mess.  Now there are just several bins of paper for Primigenitus to sort through.  Note the Gryffindor scarf hanging in the closet? That was my very first knitting project other than a swatch.  Historical value, right there. 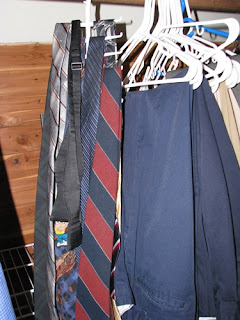 There were 3 or 4 ties hanging on this hanger when I started.  There are now 16.  All the ones I hung up were on the floor or draped over furniture.  You shouldn't treat ties this way, especially bow ties, because you know the Doctor says "Bow ties are cool."
Posted by Kathy at 9:12 PM

That's so funny--I still refer to it as ham load, too! Congratulations to your new Grover!

This was very heart-warming on many levels. I knew that something was up when I saw that mug! Congratulations to Daniel and best wishes for a successful, wonderful college experience.