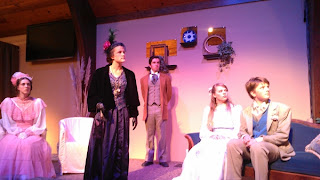 Going to see the Cedar Tree production of The Importance of Being Earnest yesterday was a good idea.  My Saturday today has been overstuffed with randomness, but the witty dialogue acted as an inoculation and I'm better able to deal with it than last week.

Yesterday was Grandparents' Day at the school.  I think this was the first year I've ever had multiple grandparents in each of my three classes.  I will need to plan better for it next year and not even try to do anything academic with 6th grade.  I had better success in 7th and 8th grades, where we played Latin Jeopardy with a little less than the usual quibbling about the rules.  And do you know, I finally figured out yesterday why the games in sections 3 and 4 of the Latin Jeopardy don't work for my classes: they are designed for 3rd and 4th year HIGH SCHOOL Latin students who are diligently prepping for the AP exam.  I would feel smart for figuring that out, but I'm a little embarassed that it took me this long.  Maybe I'll write up my own Latin Jeopardy games to supplement the ones that I keep using over and over again.

National Latin Exam results are in!  FIVE gold medals in 7th grade, and THREE in 8th grade.  No perfect papers this year, but that's the most gold medals ever!  The kids in 5th and 6th grade who took the Intro level test did respectably well but we have a long way to go together.  I doubt we'll quite see this level of overachieving next year, so I'll just have to enjoy the moment.

And with that I leave you, Randomday, to go play some more of my Civ IV "Rise of Mankind" game in which I am Empress Wu of the Chinese and it is the year 18 hundred something.  I have pursued a policy of peace and enlightenment throughout the game and am second only to the Ottomans, with whom I am on cordial terms.
Posted by Kathy at 6:58 PM