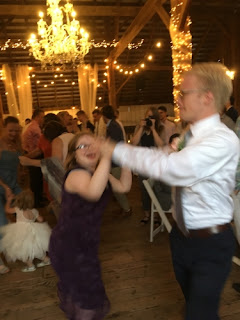 I haven't blogged all the July pics yet, and here we are in August. Some dancing shots of Daniel and Tertia at Ian and Ashley's wedding... 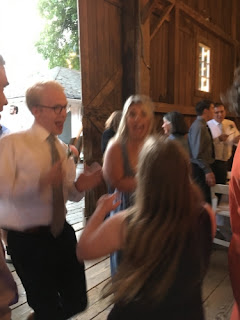 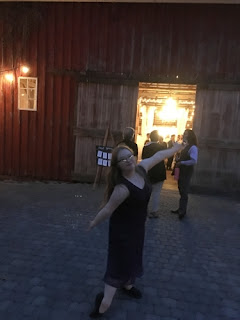 Tertia dances with such complete joy, even when her feet hurt from dancing all night. 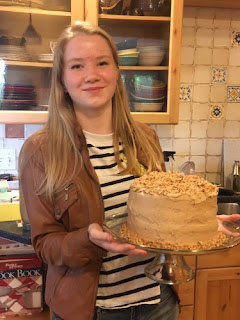 My July birthday girl made her own birthday cake. It was a Mocha Toffee Crunch cake, and it was delicious! She is seventeen now. 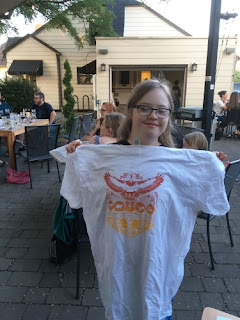 Also, Tertia and I entered the Harry Potter trivia competition on July 31 at Latte-Da Coffeehouse and Wine Bar. We won second place! Tertia is the trivia whiz... I provide transcription and spelling assistance, and I know Latin so if she remembers  something that sounds vaguely like "priori incantatem" I write it down. 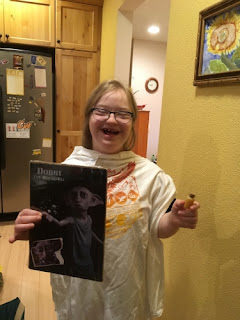 A shirt, a Dobby poster and a special vial of Felix Felicis (for decorative purposes only) were the spoils of victory. She is already making plans for the next event on Halloween. 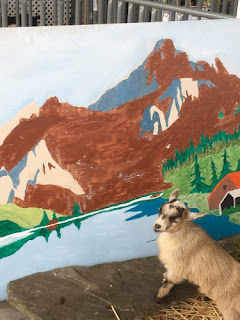 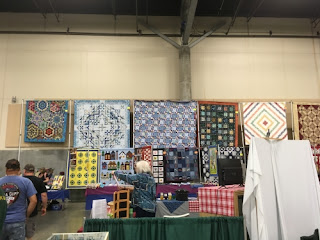 I didn't enter any quilts, but enjoyed looking at those on display. 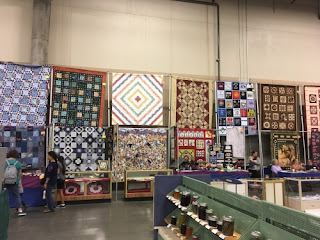 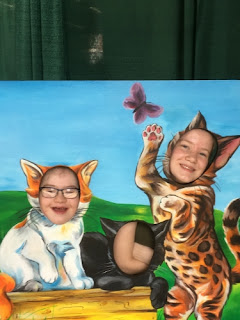 And the girls doing a silly shot in the 4H cats and dogs pavilion. Not pictured: our annual stop at the Dairy Women's booth to buy milkshakes before leaving the fair.

The plum tree is doing its thing, we are making plans for camp, the Megaquilter is semifunctional again and I am binding Grand Illusions quilt, which really deserves its own post. I'm also doing  genealogy semi-obsessively - which needs its own post; and I'm working on my Latin course for Wikiversity, which needs its own post. The random number for August is 9 - that means that my randomly selected UFO's for this month are (1) to resurrect the ancient Mariner's Compass rug hooking project from... maybe 18 years ago... and (2) work on knitted gifts for my stash. Neither of those is happening so far but I have finally turned the heel on my purple Sara Elin socks.

Ravelry is still being a booger though, so I'm spending very little time there. They have lifted the restriction on me posting but they have blacked out my profile and are showing no signs of restoring it even though I purged it of everything political and asked to have it restored. And it wasn't even political in the first place! For the record, I oppose censorship. And the people who run Ravelry ... well, I can't say anything nice. But hey, at least they aren't spitting in my food or trying to get me de-platformed everywhere else. Their lunch counter, their rules. It's just one more symptom of a broken culture, where disagreeing with the Left on anything makes you a racist, and Twitter mobs can force the New York Times to take down the bland headline "Trump Urges Unity vs. Racism" because it wasn't anti-Trump enough. Yes, definitely time to tune out of Twitter and Ravelry and any other triggering sites for awhile.

Well, back to your previously scheduled summer. I want to prep a dehydrator full of plums today. Quarta has already made a load of plum-roll-ups for the winter. I also need to tackle Tertia's clothes and bag up the surplus ones so she can actually get them put away in her dresser. And there are a few quickie baby quilts I would like to make, but probably not until after camp.
Posted by Kathy at 1:23 PM