Since the beginning of February, I have been knitting socks. Lots of Socks for the #LotsofSocksKAL hosted on Ravelry by Paper Daisy Creations. Together, we have raised a good bit of money for Down Syndrome International to use in providing support and advocacy for people with Down syndrome in developing countries. We have until May 21, World Down Syndrome Day, to knit our socks and enter them in the prize drawings. Personally, I have bought 11 patterns (I think) from 7 different designers, finished three matching pairs and two individual socks, and am working on socks 9, 10, and 11, for a total of 8 different patterns attempted. I want to knit more, but there are only so many hours a day to knit and binge-watch Marie Kondo, West Wing, Designated Survivor, and NCIS. 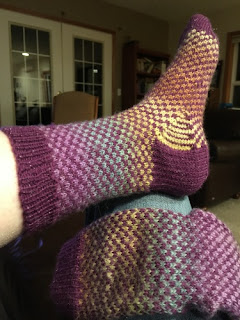 Lots of Socks by Lisa K. Ross is the title featured pattern designed by the hostess of the knitalong. It was immediately a pattern I just had to buy... mind you, until this knitalong I had never bought a sock pattern, just a few books in the past and free patterns from the early days of Ravelry. Truthfully, I was kind of in a rut when it came to socks, just doing toe-up socks for Steve and the boys mostly. I had to learn a special cast-on by "Tillybuddy" which is stretchy like the Twisted German (or is it Old Norwegian?) but is done two stitches at a time, so goes kind of quickly. I also loved knitting the mosaic pattern on these... it is fun and fast with color-changing yarns in the same way that I find knitting my diamond lattice dishcloths entertaining. 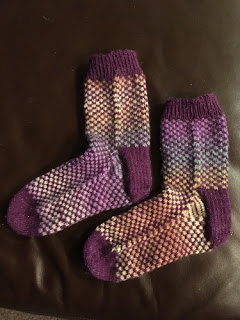 The resulting sock fabric is warm and very squooshy. I used Knit Picks Chroma for the color gradient, which is a single yarn, but it hasn't disintegrated yet after two wearings. I knit these socks one at a time, so though it was the first sock cast on in February, it was not the first finished pair. 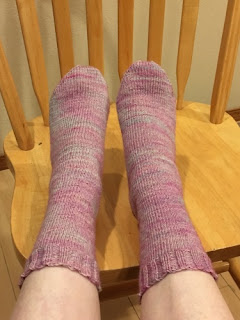 Here is my first completed pair: Non-Euclidian by Sarah Jordan. 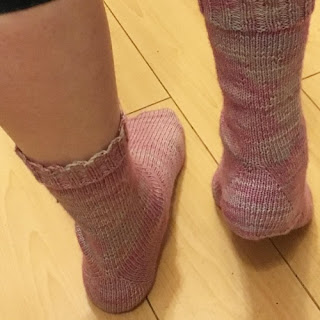 These socks feature a clever diamond/triangle heel shaping designed to not break up self-striping yarns. This is some Knit-Picks Hawthorne and doesn't have stripes, but it's a great vanilla sock recipe I will definitely return to again. I used Tillybuddy's cast-on again for its stretchiness, and once again had the chance to practice Kitchener stitch to close the toes. I don't have it memorized yet, it's on a 3x5 card, but with these two techniques there's no reason to fear top-down socks anymore. I definitely would like to knit these first two patterns again. 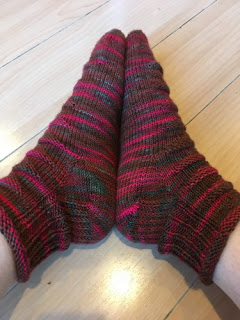 Short Attention Span by Shannon Squire. These toe-up socks knitted up rather quickly because they were in Socks that Rock mediumweight, but the first sock was a little harder because I had a hard time memorizing the flying geese pattern and doing the heel at the same time. This heel used the W&T (wrap and turn) short row technique, which I had to research with you-tube videos before I attempted it. Every time I do wraps, I get very confused. I think I did them differently on the second heel, but I can't tell. 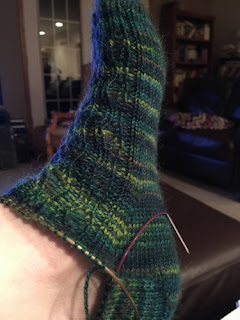 And on to the single socks. This is Rough Waters by Lisa K. Ross again, from her collection of 4 sock patterns inspired by Narnia. It is toe-up and features a dropped stitch pattern and the thing I had to learn with this sock pattern was how to do German short row heels with something called a double stitch. This was completely new to me, but I'm glad I struggled through it. It was a struggle -- Emma had a nasty stomach bug while I was working on this and I was sleep-deprived, so very little made sense when I was trying to figure it out. 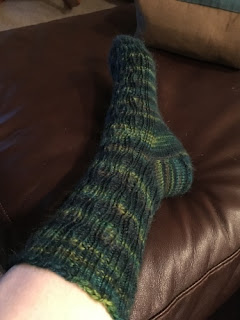 In the end, it is a very neat way of doing short rows and I will probably try to use it instead of the wrap and turn method in future socks. I look forward to completing the other sock in this pair. 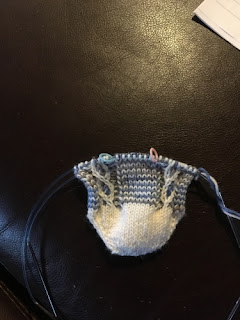 This is Epitome of Me by Megan Williams. They are toe-up also and feature a twist on either side going up the foot. I had to relearn twisted stitches, and the heel is something called an OMG (one-needle mock-gusset) heel that also uses German short rows with double stitch. So it was a great opportunity to practice that kind of short row in a very different configuration. 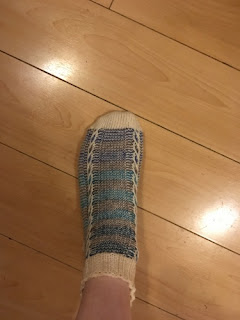 One done - these may be for Emma when they are finished. Also in progress but not pictured yet because it took me long enough to blog the socks so far -- Sara Elin by Vikki Bird, Grellow Love by Clare Devine, Flower Shock by Anna Friberg. I might just be able to get one of each of those socks done by March 21. I bought some beautiful Madeline Tosh Twist Light sock yarn and am thinking of buying yet another pattern by one of the featured designers, Coffee Talk by Traci Millar, and I really also want to cast on Voyage from the Narnia E-book by Lisa K. Ross. That's a lot of socks!

So, on to the "taking stock" part of the blog. I didn't finish any of my UFO goals for February (they were finishing quilting Celtic Solstice, and finishing my Rosalind sweater, as well as cleaning my craft area thoroughly and making a few baby quilts). But time marches on, and the UFO challenge # for March is 8. That means, for fiber arts, "spinner's choice" (I could theoretically justify ordering fiber), or I could just work on last month's neglected project. And for quilting it's the 1996 Piecemaker's calendar quilt, which needs quite a bit of applique before assembly. Or I could just knock out the machine quilting and baby quilts that need to be finished up from last month. Truth be told, I will be content with a lot of socks finished and new techniques learned, but I will definitely try to do some cleanup and organization in the process.