Since the Indiana primary, I have been struggling with near-constant anxiety and depression about the political situation. I gave up any hope of a Republican victory, (remembering that I have been a Republican for 40 years: Memories of Election Days Past written in 2012), with only a long-shot hope that the Free the Delegates people would stop Trump at the Convention, and then even less that he might step down or be forced out by parliamentary procedures with in the party. I staked out a position with the #NeverTrump crowd. I kept getting Civiqs polls, which I would always answer with "I will never vote for Donald Trump" as well as "I will never vote for Hillary Clinton." And I followed through. I have never not voted, and I have never not voted for a Republican, at least in the President slot. If I had still been living in a battlground state, like Ohio or Virginia, I would have been even more anxious and paralyzed by indecision. Because as much as I distrust the better angels of Trump's temperament to be a guiding hand on the rudder of the ship of state, I am long familiar with Hillary Clinton's policies, and they are toxic. To an honest question as to which one is preferable to the other, I was not sure. And I know I was not alone. In a sense, living in a deep blue state gave me the luxury of writing in the name of someone I knew would not win, but I, like most people it seems, was convinced Hillary was inevitable.

Seeking some peace on the eve of Election Day, I did what every Calvinist does: I googled "Providence of God memes." You know I love quotes, and some good ones surfaced. That led to researching several quotes of former presidents, and I posted many of them on my Facebook page:

"Worry is the sin of distrusting the promise and providence of God. And yet it is a sin that Christians commit perhaps more frequently than any other." - John MacArthur

"It is a most blessed thing to be subject to the sovereignty of God." - John Calvin

"It is the duty of all nations to acknowledge the providence of Almighty God, to obey his will, to be grateful for his benefits, and humbly to implore his protection and favor." - George Washington

"I have been driven many times upon my knees by the overwhelming conviction that I had nowhere else to go. My own wisdom, and that of all about me, seemed insufficient for the day." - Abraham Lincoln

"We have no government, armed with power, capable of contending with human passions, unbridled by morality and religion. Avarice, ambition, revenge and licentiousness would break the strongest cords of our Constitution, as a whale goes through a net. Our Constitution was made only for a moral and religious people. It is wholly inadequate to the government of any other." - John Adams

"I pray Heaven to bestow the best of blessings upon this House, and all that may hereafter inhabit it. May none but honest and wise men ever rule under this roof." - John Adams

(Mr. Adams sounds like a crotchety old man. I have to respect that). 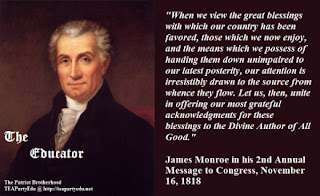 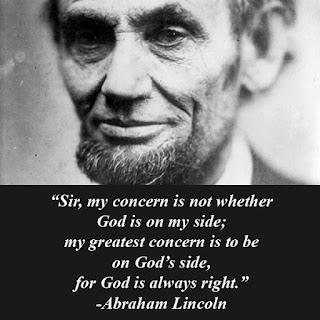 "We have been the recipients of the choicest bounties of Heaven. We have been preserved, these many years, in peace and prosperity. We have grown in numbers, wealth and power, as no other nation has ever grown. But we have forgotten God. We have forgotten the gracious hand which preserved us in peace, and multiplied and enriched and strengthened us; and we have vainly imagined, in the deceitfulness of our hearts, that all these blessings were produced by some superior wisdom and virtue of our own. Intoxicated with unbroken success, we have become too self-sufficient to feel the necessity of redeeming and preserving grace, too proud to pray to the God that made us!" - Abraham Lincoln

So, going into the day of the election, I had a little peace about the outcome even if I was very sad. But then yesterday morning, standing on the driveway with Tertia and waiting for the short bus at 6:30, I felt compelled to talk to her. She had already reminded me it was election day, and with her childcare class she was scheduled to assist in some kind of election day craft. She had watched some of one of the debates with me, and she is 17... she could vote next year. She's probably hearing all sorts of political talk at school and, because she can't process irony or abstract concepts very well, I decided I needed to tell her in very simple terms why I couldn't support Hillary Clinton for President, and why I was sad that she was probably going to win. I told her it was because Clinton thinks it is okay to kill babies before they're born, if the mother doesn't want them. That's all I said. I couldn't bring myself to tell her that unborn children with Down syndrome are killed at a much higher rate than any other group. I didn't need to. She got very quiet and obviously sad, trying to process. How do you process that an entire political system is built upon the premise of selectively denying the right to life to those most vulnerable? And how would you explain to an intellectually disabled young woman that a woman who believes it is a fundamental right to kill babies just like her is probably going to become the next president? I had a moment of sad clarity then. Sometimes, it really is that simple. People who promote the killing of babies shouldn't become president.

I found myself unexpectedly happy to see Hillary go down... maybe some of it was Schadenfreude, but also, and this was a surprise, I almost started rooting for Trump. I'll try not to gloat on Facebook, and I'll try not to use the laughing face emoji on your "why I'm mourning today" links. I'll save the snark for Twitter. But if you want an analysis of the election that I essentially agree with, check this, especially points 2 and 6. Mock Middle  America at your peril. And you really have cried "wolf" too many times.

I respect the right of every voter to follow his or her conscience, and I believe that's what played out yesterday, and we have to live with the results, and find a way to live with each other going forward. It's a complicated set of reasons that motivates any one of us in the simplest and most straightforward election, and this was not that. I still have very grave concerns about Trump's fitness for office. But I will do my duty as an American to support him, and my duty as a Christian to pray for him.

With Malice toward none, with charity for all, with firmness in the right, as God gives us to see the right, let us strive on to finish the work we are in, to bind up the nation's wounds." - Abraham Lincoln

Email ThisBlogThis!Share to TwitterShare to FacebookShare to Pinterest
Labels: #NeverHillary, abortion, decline and fall of a great civilization, down syndrome, election, politics