Somehow it always works out.  Christmas is stressful, we don't take enough family pictures, we eat too much ham and pie and candy, the youngest in the family has at least one meltdown and we become groggy, irritable and lethargic at least once during the evening.  We're not the kind of family that posts gushing Facebook updates about "best Christmas ever" or sends out those perfect family picture greeting cards.  We don't mock you if you are.  In fact, you are the impossible ideal and we have been forced to adopt a policy of admiration from afar.  No, perfection is not achieveable in this life and we aren't trying anymore.   But we still have pretty nice Christmases and they don't last long enough. 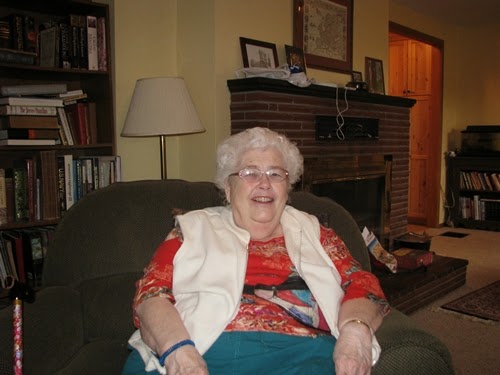 I like this picture of Steve's mom, who joined us about 10:00 am for the opening of presents.  She was a good sport about not getting too many gifts herself and just watching while the rest of the family did their thing.  She enjoyed the homemade eggnog, sampled some of Daniel's plum wine, and I think she won all the games of cribbage she played. 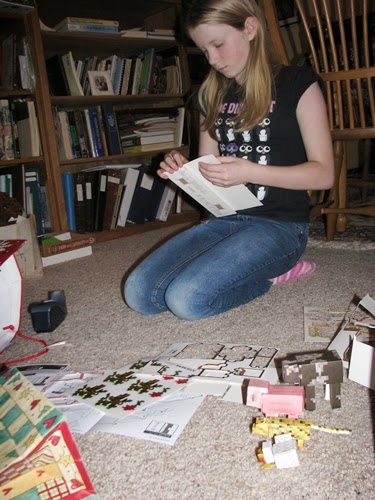 Peter bought Quarta a set of Minecraft paper animals and she spent most of the day crafting her menagerie.  Steve put together my old bedframe that has been in storage for years and we are going to get her a new mattress since the one she has been using is at least 50 years old.  She also has a Minecraft account of her own now, and fuzzy Minnie Mouse pajama pants.  Tertia has fluffy pink pajamas and a brand new Facebook account.  It may be the beginning of a whole new era. 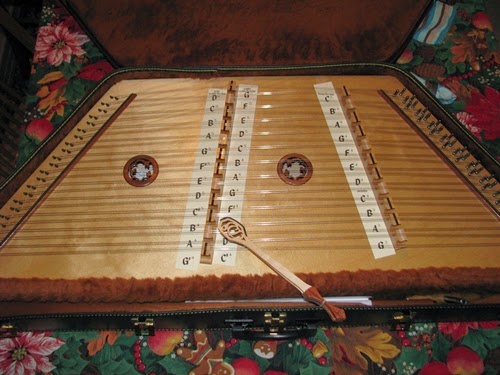 Steve gave me a hammered dulcimer for Christmas, which pretty much tops last year's gift of a Kindle (also spectacular), and was totally unexpected because it was, in my mind, in the category of Unachieveable Things that Might Materialize in the Far Distant Future.  I've always wanted one since I first started listening to Celtic music more than 3 decades ago, so I guess now is the far distant future from then.  Apparently in this futuristic world, one learns to play hammered dulcimer by watching youtube videos.  Or, since I'm kind of an intuitive learner, I just dived right in and started picking out things.  I can play Simple Gifts, Good King Wenceslaus, and the Star Wars theme (for Tertia) without too much trouble now.  I'm working on Come Boat me Over and an old harp tune that is NOT called Nonesuch but is similar, only now that I looked up Nonesuch I can't remember it and am picking out Nonesuch instead.  Such is the way my brain works, very prone to distraction.  I won't be earning money playing at dances and weddings anytime soon, but I am managing to make music. 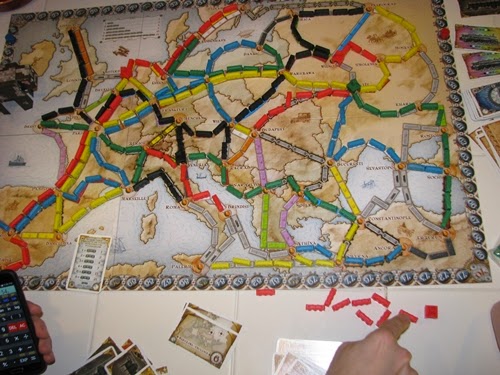 My gift for Steve was a sweater he helped pick out himself when we were shopping at the mall, and the board game Ticket to Ride (Europe).  We played it last night and he, predictably, won by a large margin (yellow).  It's a fun game and I would like to play it again now that I have the feel for it.  I was green, Daniel was black, Tertia was red and Quarta was blue.  Afterwards we watched Peter's video of Guardians of the Galaxy.  Apparently this was the only thing he asked for for Christmas (it was the movie I took him to see on Family Day after Basic Training).  I'm really glad he remembered to ask for it again right before Christmas or I wouldn't have been able to snag the next-to-last copy at Target.  It finished after midnight.

Today was a nice lazy day.  I celebrated my 1 year anniversary of using Duolingo by finishing my German "tree", and Steve and I took a 2 mile walk, and Daniel is catching up on the last few episodes of an entire missed season of Doctor Who (with the girls' help) so that maybe tomorrow we can watch the Christmas special.  I am trying not to eat all my chocolate, and there will be our traditional Ham Pasta dish for dinner, and there are still a few slices of the Chocolate Bourbon Pecan Pie that I didn't make for Thanksgiving.  Soon enough we will start the after-Christmas shopping trips to buy clothes, and the kids will choose their annual "date with Dad."  And soon after that school will start up again and we will need to plan the Last Noel.
Posted by Kathy at 4:20 PM