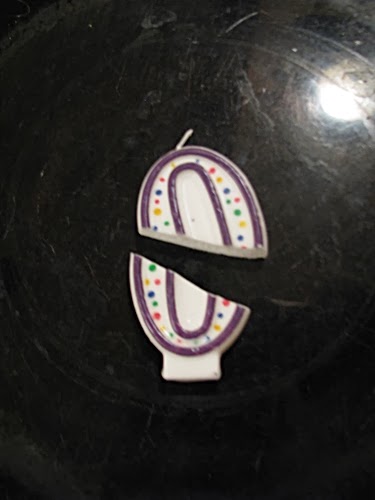 I found the missing candle.  Back in November, for Steve's (x)th birthday, I bought this along with one other digit.  Then when it came time to put the candles on the cake, though, I couldn't find the brand new candle I KNEW I had bought.  I had to rummage in the drawer and find a yellow zero that had already been used at least once.  Well, this week as I was unpacking the reusable grocery bags, I felt an extra little lump down underneath the bottom lining of one, and there it was.  But it was broken, as you can see.  I put the top half inside another almost used up candle and burned it, but discovered they only make the wicks go down about half an inch on these birthday candles.  Today I've been observing Steve being a bit of a "pyro" and playing with bits of old candles and matches and trying to get them to burn just a little bit longer.  I had never seen this side of him before.  Secundus plays with matches all the time, but never Steve.  Maybe it's some kind of metaphor when you play with broken birthday candles.

Daniel has to leave very early tomorrow to go back to college.  Last night he helped me set up an Amazon affiliate widget thingy on my computer and link it to my blog.  Theoretically, if you want to buy something on Amazon and have a portion of the total go to support Carpe Lanam in some way, I think you can do it by accessing Amazon.com through the search bar on the right.  I am not totally sure I have it set up right, but I think I do.  I promise that I will not waste any hypothetical money that comes in as a result of this attempt at monetization.  My curiosity will be to see if it's enough to buy a pack of gum, or a skein of sock yarn.  If it's any more than that, I will definitely use it for college and other family expenses.

I'm enjoying the new Kindle a lot.  I can set it up on my sewing spot and watch Netflix or listen to Pandora while sewing, so much more convenient than the laptop.  Today I think I figured out how to borrow books from the library on it.  The first one?  Let's see if I can do this link thingy:

Okay, well apparently I cannot.  But it's William Shakespeare's Star Wars, (doing it more or less the old-fashioned way) which is something I wish I had thought of first, because I would have loved to have written it, complete with R2D2 beeping in iambic pentameter and the soliloquys.  Even R2D2 has a soliloquy in which he explains how he is forced to speak only in beeps and squeaks when in company, and though he is but a simple droid he knows he will play a key part in saving the galaxy.

Yesterday was the day to give the pretests for the 2nd quarter final exam.  The next 2 weeks are going to be full of hard work and intensive grading.  I will be ready for a soliloquy on the plight of the humble and neglected Latin teacher by the end of them.  But more on this anon.  Sleep must first knit up the ravel'd sleeve of care.

One just never knows what fun thing is going to turn up on your blog. Good luck through the grading period. You have lots of dark chocolate available, right?